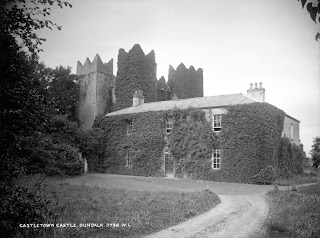 The Georgian Castletown Castle House and fifteenth century castle in the early 1900s around the time that the Eastwood Bigger family would have been in residence.
Accreditation- The National Library of 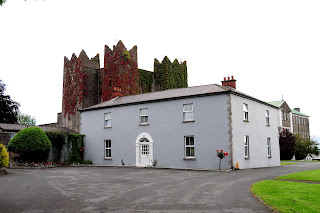 Today both the castle and house appear unchanged except for the abundant ivy that has been removed. A modern secondary school has grown up behind both buildings, of which the castle forms part. The later Georgian house is now the home of the nuns who founded the school in the 1950s.
Accreditation- Photograph copyright  Ellie Ross 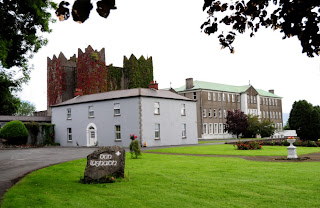 This picture shows the complex of buildings that now make up the substantial secondary school that is known as Dun Lughaidh Convent.
Accreditation- Photograph copyright  Ellie Ross 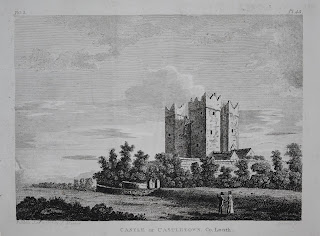 An engraving of the castle that was first published in September 1791 by J. Hooper. In this image, which shows the rear of the castle, the Georgian House built in the 1740s by the Tipping Family cannot be seen.

Castletown Castle House and Castle are situated in the town of and also are known to many of its former students as Dun Lughaidh Convent, which is all girls secondary school. The fifteenth century castle is now covered in Virginia creeper; its red hue softens the huge bulk that is the ancient structure, and provides a dramatic backdrop for the smaller Georgian house. Initially when I found the picture of Castletown in the photographic collection of the National Library in , I thought that these buildings may have been swept away by progress. I was pleasantly surprised to find that not only are they still standing but both are still in active use. When I visited Castletown in July 2011, the sisters that live there are still extremely enthusiastic about the history of the building that they now call home.

Richard Bellew built a tower house in the fifteenth century at Castletown above the town of and it was here that his family and descendents lived for nearly two centuries. Castletown or was built around 1472 on the site of an earlier castle that was ‘once defended by a strong wall and other works of circumvallation’. The square tower house stands nearly twenty metres in height and four smaller towers project from each of its corners. One of the most defining features of this building are its battlements, which are known as crow–stepped or Irish battlements. James II ennobled the Bellew family in 1686 and John Bellew of Castletown became Baron Bellew of Duleek in . By the late seventeenth century the Bellew association had ended and the castle was abandoned. In 1740, Edward Tipping had acquired the castle with the surrounding lands and proceeded to build a modern Georgian house adjacent to the ancient structure. The new house was a plain two-storey dwelling with a three bay entrance front and became known as Castletown House. Often cold ancient castles were cast aside in favour of newer, more manageable houses which were often built beside their elder predecessor. Some of the rooms of the castle were still used by the Tipping family mainly as ancillary areas to the new house such as a kitchen and servants hall. The main rooms of the castle on the first floor have a barrel-vaulted ceiling supporting the principal living area above, heated by two large fireplaces. A spiral staircase in one of the corner towers was used to access each floor and the roof of the castle which was often used to entertain guests with views of bay and the surrounding countryside.

By 1784, the Tipping family had left Castletown Castle House and it was purchased by John Eastwood from . In 1786 it is recorded that the Eastwoods are in residence in Castletown House and several rooms of the castle are said to be still habitable at this time. It was during the ownership of the Eastwoods that the castle became neglected and started to become dilapidated. When John Eastwood died in 1790, his son James, a clergyman, inherited the castle, house and demesne. Rev. James erected an archway at the gate to the walled garden in the grounds of the house, where he placed a plaque that recorded the date that he inherited Castletown. In 1806, James Eastwood was still living at Castletown but when he died two years later, the estate was inherited by his younger brother Charles. In a survey carried out in 1823 Castletown was recorded as being the home of Charles Eastwood Esq. and was described as ‘a fine ancient castle in good repair, a neat modern lodge which has been attached to it by Mr. Eastwood’. Charles left his mark on the castle like previous generations when he carved his initials “CE” in the stone surround on the right hand side of the entrance doorway to the castle. He died in 1828 and was succeeded by his eldest son James, who it was noted in 1837, had great intensions of renovating the castle and making a residence for himself. These plans were never implemented and instead the run-down structure was used as out offices. Time and money were lavished on landscaping the grounds around the house, many trees were planted and the walled garden was improved with the addition of many exotic plants. A formal garden was laid out to the south and in later years an orchard and a sunken tennis court were added.

In 1851 the last public hanging took place in of two men who attempted to murder James Eastwood at Castletown. They tried to steal his gold watch and after an altercation, he was thrown in to a nearby quarry and left for dead. Despite his severe ill treatment, James still pleaded for clemency and tried to save the men’s life, but this was to no avail. James who was the local magistrate, died without issue in 1865 and his body was returned to the family vault in . His wife, Louisa, inherited the house, castle and estate lands which included 877 acres in . After James’s death, the family experienced financial problems and a lot of land was sold under the Land Purchase Acts to clear the substantial debts. In 1886 the castle under went some repairs to its roof and battlements which was mentioned in Barrett’s Directory.  The house and castle eventually passed from the Eastwoods to the Bigger Family, who came from the nearby Falmore Hall and were related through marriage. It was obviously a condition of the inheritance that the Bigger family had to adopt the additional surname of Eastwood in order to secure the estate. By the time of the 1901 census, John James Eastwood Bigger is resident in Castletown Castle House with his wife Kathleen and their three servants. John James appeared to own a lot of the surrounded properties and was still in residence in Castletown by the time of the 1911 census when the house is described as having thirteen rooms and eighteen outbuildings.

An insight to the life of a servant in Castletown Castle House in the early 1900s was described following a tragic incident that took place there in October 1910. An inquest was held relating to the death of Lawrence Treanor at Castletown, a coachman in the employment of Mr. Eastwood Bigger. He was found dead after mistakenly drinking oxalic acid instead of Epsom salts, which he had purchased for the purpose of removing stains from hunting boots. On the following Sunday morning, he drank the acid and died a short time afterwards. Sometimes instances like this were reported as being accidents whereas in reality these were the drastic actions of people trying to escape their mundane existence. The end of the Eastwood Bigger family connection with Castletown came in May 1925 when John James Eastwood Bigger, Junior of Castletown, was declared bankrupt. It was interesting to note that that the advertisement of the bankruptcy noted that any proof of debt sent to the Four Courts before May 1922 would have been destroyed in a fire during the Irish Civil War. In September 1926 as a result of the implosion of the family finances, and House with ten cottages were to be sold at the auction rooms of E.J. Bothwell. The main house is listed as having three reception rooms and eight bedrooms with servant’s apartments. Outhouses comprised of loose boxes, a coach-house and harness room. The house and castle were sold with thirty-seven acres of land, which included fruit, vegetable and flower gardens, which incorporated tennis courts. The lands of the Eastwood estate were eventually sold to the Land Commission and divided among the tenants. In the 1940s the Taafe family purchased the house and grounds.

By May 1950, Castletown Castle House was listed for sale and was eventually purchased by an order of nuns who began the arduous task of turning the building into a school. The foundation of the school began when part of the Georgian House was used accommodate classrooms for first students. The castle has become part of a substantial complex of buildings that has grown up around it, which accommodates 600 students. The Georgian house eventually became the home to the sisters of and remains similar to when the Eastwood family lived there. Its internal layout appears unchanged with the exception of one of the reception rooms, which has been converted into a private chapel. Initially when the school opened, the old castle was used as storage as previously to this, it had been used to store apples from the nearby orchard.  Eventually as the school expanded the decision was taken to utilise the castle building to provide additional space. The survival of both the house and castle today is a reflection of the passion and commitment that the current owners have devoted to their preservation