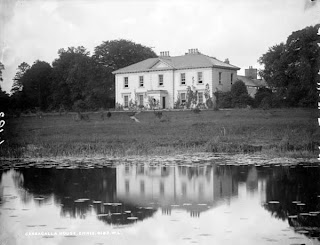 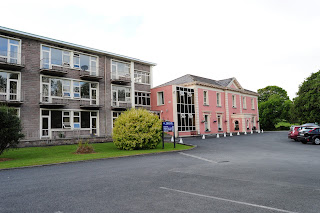 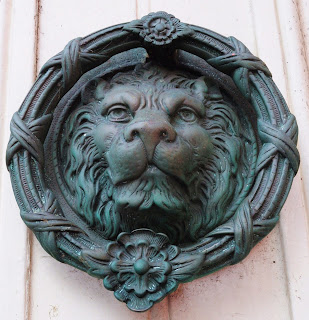 Times have not been kind to this building that appears majestically overlooking a lake in the black and white picture from the National Library. The lake is a distant memory and the house is now a community hospital. An unsympathetic wing has been added that detracts from the simplistic beauty of a house. Cahercalla House is situated near Ennis in County Clare, details are few but it was occupied in the 18th century by the Crofts, England and the Maguire Families. In 1735 a James Croft died there in 1735 and later The Clare Journal reported that a Joseph England died there on Monday 1st February 1779. In 1814 the property was owned by David A. England. The Ennis Chronicle of 28th October 1818, reported that a Thomas Mc Mahon died at Cahercalla the home of David A. England. David Arthur’s mother was a member of the Mc Mahon family and the house was probably inherited by a member of the McMahon family as a Charles Mahon lived here in 1837.
The house was then owned by Wainright Crowe in the 1860 when he was High Sheriff for Clare. In 1868 on the instructions of Wainright Crowe nine acres were enclosed in to form a Fair Green which eventually became the town park in Ennis. In 1873. Wainwright Crowe of Cahercalla died, he had been the agent for Lord Leconfields extensive Irish estates having succeeded both his father and brother in the same position. In 1887 Edith Millicent Crowe daughter of Wainright Crowe married Wyndham Harry Payne- Gallwey In the 1901 census Wainright Francis Crowe  aged 39, a son of the previous owner, is in residence in Cahercalla House with his wife Ellen Mary, his two daughters Muriel Francis and Milicent and his brother Edmund together with  five female servants. By 1911 only Wainright, his two brothers and two female servants are listed as living in the house. The house is listed as having 30 rooms and 11 windows on its entrance front.  In 1909 Wainwright F. Crowe agreed to sell over 1’600 acres to the Congested Districts Board. The Cahercalla Estate and residence were aquired by St. Flannan’s College in 1935, three years before the arrival of St. John of God sister's from Wexford.  In 1951 the Bishop of Killaloe opened Cahercalla as a private hospital to be managed by the Sisters of St. John and it initially accommodated 35 patients.