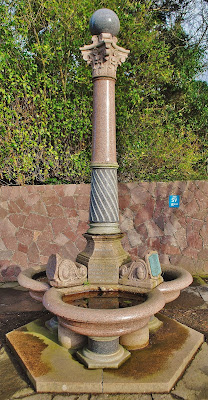 The Font in Ballina, Co. Mayo is a well known landmark and is often mentioned when giving directions due to its distinctive appearance and location at the junction of and . Now well in to its second century, having been erected in 1901, few may know of the tragic reasons for its construction or its associations with a local country house. The memorial is still emblazoned with the name George James Vaughan Jackson who once resided at Carramore House, a large Georgian mansion about two miles from the town. Today, Carramore is a forgotten ruin and few will know of the connection between this house and the memorial fountain in Ballina. It is interesting to note that  the committee, in charge of commissioning the monument, discussed numerous designs and locations ranging from Crossmolina to Ardnaree. There was even the possibility of surrounding it with metal railings and accommodating drinking troughs for dogs.

George James Vaughan Jackson was born in 1860 and was the son of Captain Oliver Vaughan Jackson of Carramore House, Ballina. He appears to have been a man who had interests in all things equine, as he was a member of the North Mayo Hunt but also appears to have owned a number of horses, one in particular Bedouin who had won the Cairo Jubilee race in . It was said that George had come in to the ownership of the Carramore Estate upon the death of his father in 1890. On the night of the 8th April 1898, George James Vaughan Jackson was returning home from Ballina where he had been doing business during the fair day. As turned his horse and trap off the main road at Rehins he encountered  'a light from a travelling caravan' which was drawn up near the side of the road close to the railway bridge. As he drew closer it appeared to be an ' encampment of peddlers'  who had a cart piled high with baskets beside which they had lit a fire. As his horse was a young animal, George alighted from the trap and intended to remove the horse from the shafts to lead it past the obstruction in the road. However the horse bolted and broke its reins resulting in the shafts of the trap breaking free and striking George on the side of his body, knocking him to the ground. Once he regained his feet and being unable to find his horse, he walked the two miles to his home, Carramore House. There he was met by his sister, whom he assured that nothing serious had happened to him but the following morning he was feeling extremely unwell. The local doctor was sent for and it was found that George had serious internal injuries from which he would die the next day. It is said that he passed away after ' bidding a most affectionate farewell to his mother and sisters'. His large funeral cortege extended to over 140 horse drawn vehicles which left Carramore House and  made their way to the family burial plot in the yard. The probate of the will of George James Vaughan Jackson was granted to Dr. Percy V. Jackson also of Carramore House who was a surgeon and a brother of the deceased. His estate was valued at £2,177 7s 9d ( which is nearly €300,000 in today's money). 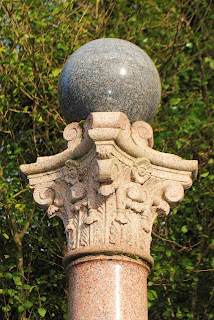 One month after the passing of George it was proposed that a memorial would be erected in his honour. In May of 1898, a meeting was held in the Moy Hotel  in Ballina town where gathered ' the friends and admirers of the deceased'. It was the members of the North Mayo Hunt who first intended to erect a memorial however with the volume of support from the people of Ballina for the project, the subscription for the memorial was opened to the public. Firstly it was proposed that a monument would be erected over his grave, however it was then considered that as ' he was buried in a remote place....that very few of his friends could have an opportunity to see it'. Then it was suggested that the memorial should be placed in St. Michael's Church in Ballina, however there were a number of objections to that proposal. Eventually it was decided that a water fountain would be erected in the town and that the fountain should be of benefit to both people as well as horses. It was proposed that the fountain should have a statue or the likeness of George placed upon it, however it was agreed that until funds were accumulated, the design of the fountain could not be decided upon. As an illustration for the enthusiasm for the project, by the end of this initial meeting, £67 12s had already been collected. By September of that year £118 10s 6d had been gathered, however the committee were £20 short of what they required and £50 short for the iron railing that was to be placed around the fountain. By March 1899, the committee met again and discussed a design for the memorial fountain, proposed by Harrison & Co., which was to be made of limestone. The committee had earlier contemplated a design made of metal but due to budget implications but it was rejected. Also at this meeting it was proposed that as well as having a trough for horses that a trough should also be integrated  for use by dogs. I had thought that this was something what wasn't included in the final design, but if you look at the fountain today you will see the lower troughs for the use of dogs are found nearer the ground under the main troughs. 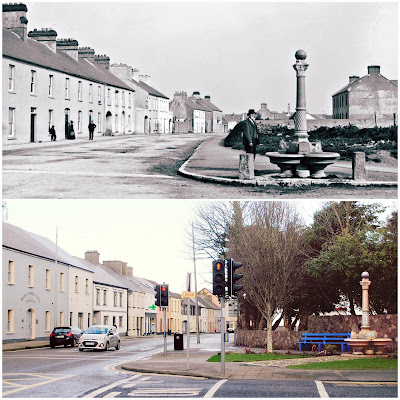 By June of 1901 a decision had been made on the final design of the fountain and Mr. E.E. Atkinson wrote on behalf of the Jackson Memorial Committee requesting the permission of the Urban Council to erect the memorial, which was given. In August 1901, the fountain was completed by the contractors opposite 'Baxter's Corner' in the town of . It was made of granite, cost £184.00 and stood on a hexagonal concrete foundation. It was made by Scott & Rae, and was erected in Ballina under the supervision of their very capable representative, Mr. Robert Taylor. The company of Scott and Rae were established in in 1881, it appears they had completed a number of public drinking fountains in their native and usually worked in pink granite. The fountain is composed of three large drinking troughs for either ' cattle or horses', and rising from the centre is a red and grey granite column diagonally carved and topped by a grey granite ball. Above one of the troughs is a bronze shield having an engraving of a horse. Above another trough was a tablet with the inscription:

'To the memory of
George James Vaughan
Carramore, Ballina,
Who died on the 10th day of April 1898'

On either side of this main plaque were smaller tablets with the inscriptions ' Erected by public subscription' and 'He passed from among us in the prime of life, respected and beloved by all'. However the fountain wasn't fully completed at this time as the Memorial Committee did not have the funds to undertake a number of works themselves. The entire cost for the project came to £184 ( which is would be about €25,000 in today's money) but the fund had only raised £179 however the contractors in an act of generosity remitted the difference. Now that the fountain was it in place, it was still necessary that guard stones should be erected around the monument to protect it from damage from cart wheels for which the committee had not the funds.  Therefore the committee asked the Urban Council if they would be in a position to complete these works and in early photographs of the memorial we can see that these were indeed put in place.

The family home of the Vaughan Jackson family was Carramore situated about two miles from Ballina town. It was a two storey over basement Georgian house built around 1819. The house is surrounded by a large walled garden and an impressive coach house which is still in relatively good condition today. After the death of George for whom the memorial was erected, Carramore House passed to his brother Percy and in later years in October 1920, £75 was claimed by him for malicious damage to Carramore House. Whether this was the reason or not, Percy left Carramore to live in in 1926 having previously resided at Carramore for 27 years. Percy Vaughan Jackson died in in 1943. The house then came in to the ownership of Mr. and Mrs. Thomas J. Reid and in 1935 it was reported that their son Ivan, of the Indian Medical Service, was to be married in . By this time, Miss Beryl Reid, a daughter of the owners of Carramore, was visited by a a reporter who was covering her various enterprises at the house.  They were amazed at her achievements in the garden and the intricate planted beds in the area to the front of the house that she had created. Miss Reid appears to have been an enterprising woman for her time, she had constructed three large glass houses, one alone measured 125 x 30 foot and was in addition to the two older smaller glasshouses that already existed on the site. In July 1935, she had over 2,000 tomato plants growing and 10,000 chrysanthemums plants waiting to go to market. In the 1930's Carramore was also advertised as a guest house, so its appears Miss Reid was doing everything possible to make an income from the property. In 1936, Thomas Reid died, leaving his wife and their two unmarried daughters responsible for Carramore. In 1939 the house suffered a fire and one bedroom was burnt out, it was reported that two sisters Phyllis and Beryl Reid and their invalid mother, Florence, were present in the house at the time. The fire was started by a wireless set which the sisters fought for three hours on their own with buckets of water. In April 1944, Beryl's and Phyllis's mother died and she was buried in St. Michael's Church in Ballina.

As a result of this, in August 1946, Carramore House was advertised in the national press for auction under the instruction of  the representatives of the late Mrs. Florence Eleanor Reid, in the advertisement the house is described as 'a Magnificent Gentleman's Residence'. The accommodation of the house extended to four reception rooms,  lounge, front hall, kitchen and twelve apartments ( which must mean bedrooms). The grounds included a walled garden, coach house and tomato houses with room for 3,000 plants. A person who visited the house in the 1940's recorded that the family had only retained forty acres around the house and that the library of Carramore contained over 3,000 books.  In November 1957, it was reported that Carramore was to be demolished as it had recently been purchased with its land by two local farmers.

Today (shown above) the walls of Carramore still stand, shrouded in ivy but this house like the history of its occupants is forgotten. The font that now stands in Ballina is one of the few tangible connections we have with Carramore House and the Vaughan Jackson family. As the town of has changed around the font, it became necessary in 1968 to move it 12 feet further back from the edge of the road and it was moved again in 1983 to its current location.

While the Vaughan Jackson memorial is one of the few attractive pieces of sculpture that we have in Ballina, the area around this memorial has never been designed or landscaped in such away to show off its true beauty. It might be something to be considered by Mayo County Council, as next year will mark 120 years since the death of the man the fountain commemorates.