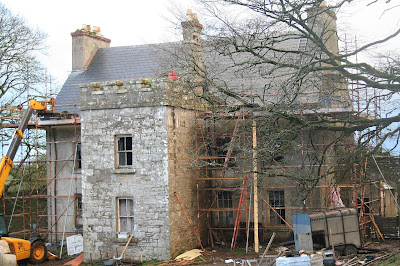 
I was recently surprised when reading the obituary of Eileen Wren, Countess of Mount Charles that her birthplace was listed as Heathfield House in Co. Mayo. For a number of years I had observed this house from a distance when travelling nearby Ballycastle town in the county. Eileen was the mother of Henry Mount Charles, the current Marquess Conyngham of the world famous Slane Castle in Co. Meath. Lady Mount Charles was born in Heathfield House near Ballycastle in Co. Mayo in 1924. Her father, Clement Wren Newsam, was also a descendent of the famous architect Sir Christopher Wren, who designed St. Paul’s Cathedral in London. Clement moved to Ireland from New Zealand and married in 1921 the widow of Bertram Bourke of Heathfield. Bertram, the heir to Heathfield, had died in action in 1915 during the First World War. In 1927, when Eileen Wren was only three years of age, Heathfield was taken over by the Land Commission and the family were allocated a farm in Beauparc in Co. Meath. Much later in 1950, Eileen married the Earl of Mount Charles and became the chatelaine of Slane Castle, where in later years their son, Henry,  would become famous for holding rock concerts. As well as a direct connection with the Mount Charles family, this house situated in the Mayo countryside, also has a connection with the first female President of Ireland. Mary Robinson who is a member of the Bourke family who would consider this house their ancestral home. 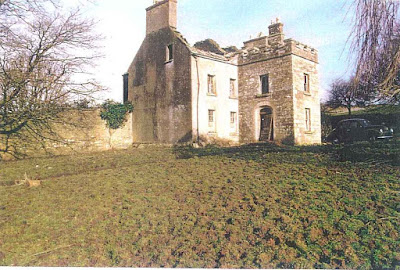 Heathfield before the reinstatement of its roof in 2011
Picture ( above)  Copyright : Taylor Architects, Castlebar, Co. Mayo


In the records of The Architectural Inventory of Ireland, Heathfield is described as a detached, five-bay, two-storey farmhouse with dormer attic, which was known to be in existence in 1775. The house was originally a five-bay, two-storey house on a T-shaped plan however a later addition of a projecting battlemented tower to the front of Heathfield gave the house a more imposing presence. This addition to the front of the house probably occurred pre-1896 when it was recorded that the house was ‘improved’ at this time. This tower obscured the earlier pediment on the front of the building which would have given it a similarity to nearby Summerhill House in Lacken. Heathfield has always been considered the ancestral home of the Bourke Family, a Walter Bourke was born in Heathfield in 1770 to Oliver Bourke and Elizabeth Rutledge. Oliver later married Barbara Ann Gildea and the marriage produced ten children. Walter Bourke passed away in 1819 followed by his widow Anne who died in 1829. Both are buried in the graveyard in nearby Kilcummin where their mausoleum remains today. In 1846, Heathfield was recorded as being the home of Robert Bourke, who was possibly the son of Oliver and Anne. It was reported that a Walter Bourke of Heathfield House in Co. Mayo was gazetted by purchase to an Ensigncy in the 56th regiment in June 1849. The following year, in June 1850 in Monkstown Church in Dublin, Rev. William Bourke of Heathfield in Mayo married Harriette Sarah, the fourth daughter of Jacob West of Loughlinstown House, Co. Dublin. It is recorded in The Freeman's Journal of 1852 that the wife of Rev. William Bourke gave birth to a son on May 27th at Heathfield.  In 1876, the Heathfield estate extended to over 1,600 acres which passed on to the next generation when Reverend William Bourke died on the 20th April 1881. 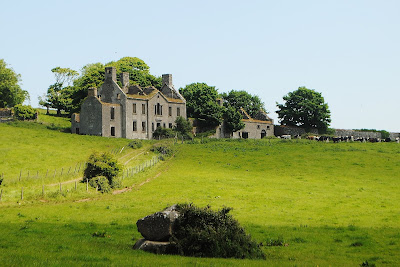 Summerhill House situated in nearby Lacken would bear a similarity to Heathfield before the addition of the tower to the front elevation that would have obscured its pediment.
Picture ( above)  Copyright : ICHC


The next owner of Heathfield House was Major William Henry Bourke of the North Mayo Militia who died in 1896 in an exotic location in comparison to his Mayo home. His death occurred at Villa Porte Rouge, St. Servan France and his last will and testament was probated by his widow Sarah Louisa Bourke of 38 Colbeg Road, Upper Norwood London. Heathfield now passed to William’s and Sarah’s son Bertram Walter Bourke. In December 1902 a display of fireworks took place at Heathfield for the tenants in honour of the coming of age of Bertram. Two years later Bertram lost his mother when she died in June 1904 at Frognal Mansions, Hampstead. In September 1907, a former clergyman of the parish, Rev. Canon Foley was formally presented with the furniture for his new rectory in Tralee in Co. Kerry. This was the generous gift of his former parishioners in Ballycastle and Lacken. The presentation took place at Heathfield House, the residence of Bertram Walter Bourke. Forty people gathered at the house and were entertained by Mr. and Miss Bourke, this would indicate that Bertram lived in the house with his sister. The parishioners were grateful to the clergyman’s wife, Mrs. Foley who trained the church choir. Despite it being a poor parish, £26 had been collected to purchase the furniture for Canon Foley who had spent eleven years in the parish. 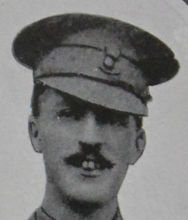 Bertram Walter Bourke of Heathfield House who died in the First World War in 1915
Picture ( above)  Copyright : Our Heros Website
The outbreak of the First World War resulted in the death of Captain Bertram Walter Bourke. He died on May 9th, 1915 aged only 33 and is buried in Ypres. He had become a Captain in 1908 and in 1913 had married Eileen, daughter of Mr. George Neville Ussher of Ballinacarrig House, Carlow. After his death, Heathfield passed into the ownership of Bertram’s widow and their two daughters. Eileen Bourke remarried Clement Wren Newsam which resulted in the birth of the daughter who would later become the Countess of Mount Charles. 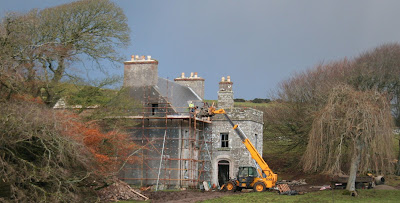 Heathfield during the reinstatement of its roof in 2011
Picture ( above)  Copyright : Taylor Architects, Castlebar, Co. Mayo


In The Irish Independent of 6th May 1922, it was said that Heathfield, a mansion in Ballycastle, Co. Mayo with an estate of 500 acres and the property of Captain Newsam had been seized by the Executive Forces. They announced that in the future it was to be worked for the benefit of the Belfast Expelled Workers Fund. In 1923, Mrs Newsam of Heathfield House, Ballycastle was awarded compensation for malicious damage that had been done to her property. The unsettled political situation and the offer of the Land Commission to resettle the family resulted in the decision in 1927 for Bertram's widow together with her family to move to County Meath. After the departure of Bertram's widow, Heathfield came into the procession of the Brice/ Bryce family. In the following decades the house went in to decline and eventually its roof of heavy Mayo slates collapsed. Previous to this occurring, some items of furniture from the house made their way, through family connections, to Enniscoe House in nearby Crossmolina where they remain today. The house remained as a ruin up until 2011 when the structure was stabilised and its roof reinstated. 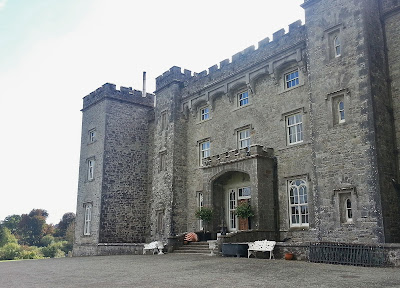