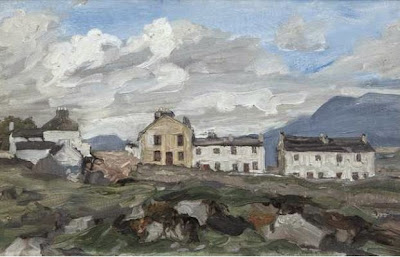 This painting by Jack Butler Yeats was bought by Oliver St John Gogarty at an exhibtion in 1918. Oliver St. John Gogarty was a man who certainly had a zest for life, not being content with a successful career as a surgeon he also was known as a poet, author, playwright, an athlete, pilot and senator. A huge admirer of Connemara, Gogarty, a friend of W.B. Yeats, had acquired Renvyle House in 1917. Jack also knew Gogarty and illustrated his 1918 volume, The Ship and Other Poems. 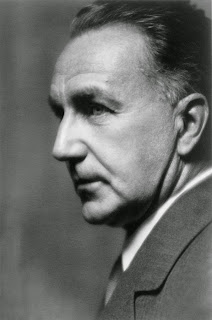 Oliver’s house at Renvyle in Galway was a very old dwelling which had existed on the site since the seventeenth century with the remains of Renvyle Castle being located nearby. When Gogarty purchased Renvyle House in 1917 he had intended to run it as a hotel but decided to keep it instead as a private residence. The house came with two hundred acres but this was divided in half by the Land Commission among its tenants. The house had many rooms including one that had a ghost and a barred window. It was during a visit to Renvyle after the Gogarty purchased the house that the poet WB Yeats and his wife aimed to get to the bottom of the mystery of this haunted room. With the creation of the Irish Free State, Gogarty was appointed as a Senator which made him and Renvyle House a target for Anti-Treaty Republicans. 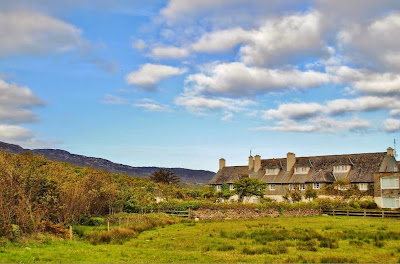 Three men commandeered Renvyle in February 1923 and stayed the night. The following morning more men arrived and saturated the house and its contents with petrol and set it alight.  Oliver was heartbroken over the loss of the house but being the pragmatic man that he was, he knew it could be rebuilt. However it was the loss of what was contained inside the walls of the house that grieved him more. The portrait of his mother painted when she was a young woman together with many other paintings by artists such as Jack B Yeats and his collection of over 3,000 precious books were incinerated. Oliver recorded that the house now only comprised of ‘ten tall chimneys stand bare on Europe’s extreme verge’. Gogarty rebuilt the Renvyle and opened it as a hotel which it continues as today. Gogarty’s daughter, Brenda, later Mrs. Desmond Williams, inherited this painting and it was part of the Williams’s prestigious collection of Irish art for many years. 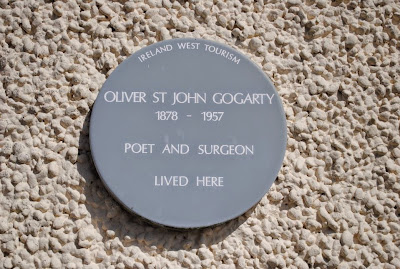 You can read about the history of Renvyle House and Oliver St. John Gogarty's art collection in my latest book ' Irish Country Houses - Portraits and Painters' 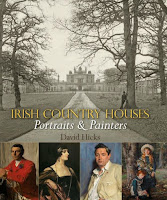