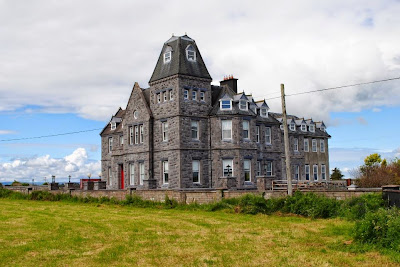 The house known as Errew Grange is located outside the town of in . Perched high on a hill, the building enjoys the duel aspect of overlooking in one direction and a full vista of in the other. When one stands on the site that Errew Grange now occupies and surveys its surroundings, it is easy to understand why Granville Knox decided to build a home here. The architect, James Franklin Fuller, who designed Errew Grange also designed a similar building located nearby. Another grand house known as Mount Falcon shares a number of exterior features in common with Errew Grange, such as a prominent corner tower. As the original interior of Errew Grange was lost in a fire, we must look to Mount Falcon to see what the original interior of Errew Grange would have looked like.

Granville Henry Knox was born in June 1840; he was the son of James Annesley and Mary Mina Knox of near Crossmolina in . In July 1862, Granville married Ellen, daughter of Richard Frederick Farrer. His new wife was a wealthy heiress and Granville used her funds to establish himself locally as an up and coming gentleman. He purchased lands at Errew in the parish of Crossmolina in the West of Ireland from Charles O'Donnell and by 1876 he owned 1,182 acres in and 1,128 acres in . In 1872, he started to erect a mansion in Errew and the contract price was settled at the princely sum of £5,000. Skilled workmen were brought from and no expense was spared in turning Granville’s dreams in to a reality. 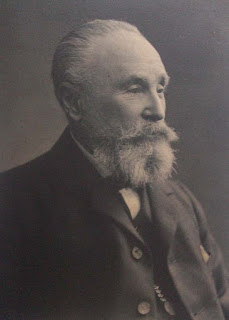 During construction of his mansion, he proceeded to spend his wife’s fortune at a phenomenal rate. Materials were brought from , by rail, to Ballina and then brought by horse and cart to Errew. Granville’s mansion was built with freestone on the inside and cut limestone on the outer face, all the stone was brought from Meath for five shillings a ton. This robust construction is probably one of the reasons why the ruins of the house survived the fire in 1949 to be restored in later years. Granville’s extravagance and the numerous changes that were made during the construction meant that the final cost of the build far exceeded the £5,000 originally quoted. In fact some reports at the time estimated the amount to build the house at around £10,000 which was double the original estimate. The completed Victorian Gothic house now sat on a peninsula jutting out into , rather similar in architectural style to situated on the opposite side of Ballina. The architect who designed both of these houses for the influential Knox family was James Franklin Fuller. He was the favorite architect of the gentry at this time and during his career he completed many well known commissions such as Kylemore Abbey and extensions to .


During the 1870s, Fuller carried out a lot of work for the Knox family in . In 1871, he was involved with the construction of for Utred Knox and in 1872; he also carried out work for the Knox’s of near Ballina. For them he designed a new gateway to the castle and an impressive monument over the grave of Arthur Knox-Gore who died in 1873. It was during this period in the 1870s that he was also involved with the design and construction of Errew Grange for Granville Knox.


By the time the house was complete; Granville had spent his wife’s fortune and was heavily over extended financially.  As a result, neither he nor his family could afford to live in the large house and Errew Grange remained empty, a monument to one man’s self indulgence. Members of the Knox Family who had lent money or guaranteed loans were now pursued for Granville’s debts. They christened the house ‘Knox’s Folly’ and eventually Granville was declared bankrupt and ended up in the Encumbered Estates Court. On July 10, 1886 the Sheriff’s bailiff took control of the property and Granville Knox was last seen on his way to the train station in Ballina to emigrate to .  Afterwards he sent for his family and it is believed that they enjoyed more success in their adopted homeland having possibly learned hard lessons in Errew. In May 1891, Maurice J. Fitzgerald proposed to rent Errew Grange for £55 a year from the and open it as a hotel to attract fishermen from . It was argued by a local landowner, Paget Bourke, that a rent of £120 should be imposed as there were forty acres of prime land attached to the building. Paget was informed by the Judge that it was better that the house be rented for £55 a year, then for the building to lie empty for ten years. In 1893, Errew Grange now entered a new stage in its life when an advertisement appeared for winter shooting at the Lough Conn Hotel. The proposed endeavor must not have been a success as a Maurice J. Fitzgerald of the Lough Conn Hotel, Errew, Crossmolina was judged bankrupt on November 29, 1895. What ever happened after the 1895 bankruptcy, by the time of the 1901 census, Maurice J. Fitzgerald is still in residence and in his position as hotel proprietor. There were eight persons occupying the hotel which included Maurice, his wife Joan, his daughters Alice and Geraldine together with four servants. The house is listed as having twenty-five rooms, fifteen windows across its entrance front and only four outbuildings.

In 1905, a court case was heard relating to the former Granville Knox estate and the mansion at its core. The case involved a decision being put before the court in regard to who was fully entitled to purchase Errew Grange, which was still tenanted by Maurice Fitzgerald. The rest of the Granville Knox estate had been sold to tenants over the years but the part containing Errew Grange and 80 acres was left out. From my reading of the situation both Maurice J. Fitzgerald and Paget Bourke wished to buy the property. Mr. Fitzgerald had been using the residence as a hotel and he had spent a lot of money on its improvement. His solicitor argued, unsuccessfully, that Maurice J. Fitzgerald as tenant should have been allowed to purchase the property at a lower price of £1,100. The judge found in Paget Bourke’s favour and he was allowed purchase the property for the higher amount of £3,000. After this decision Maurice J. Fitzgerald closed his hotel as by time of the 1911 census there is no mention of him or his enterprise at Errew. In the 1911 census there is a building listed that bears a similar description to Errew Grange which is now occupied by John Watters and the owner is listed as Harry Bourke, a solicitor based in Ballina. Harry or H.C. Bourke, as he was known, inherited the house from his father Paget Bourke. The house must been empty at the time of the census as there is no return for John Watter and no details relating to the interior of the house are recorded.


Another phase in the history of Errew Grange commenced when three sisters from a French order of nuns arrived in Mayo in 1912. After they had received permission from the local Bishop, they began to search for a house that would be suitable for use as a school. They leased Errew Grange from H.C. Bourke and the sisters were soon joined by other members of their order. In November of that year they opened their school at Errew with twelve day pupils and four boarders. By 1916 the number of students had increased dramatically and the school moved to a larger property called Gortnor Abbey nearer to the town of . I am pleased to say that this school is still in existence and has recently celebrated one hundred years since it was established at Errew Grange. After the departure of the school, the house was later leased to Mary (Molly) Canavan who continued to run it as a hotel attracting fishermen to the nearby The hotel was described as a sanctuary, as loud boisterous talk would not find place among the finely furnished reception rooms. In 1948 disaster struck when Michael Gibbons, a servant, inspected a gas leak with a match. There was a terrible explosion, leaving the hotel a blaze in minutes. Neighbours and locals helped rescue what they could and fight the conflagration but the loss was enormous. Due to the prominent position of Errew Grange on the hill above the lake, the fire could be seen for miles around. Within hours the hotel and its contents were reduced to blackened walls and ash. For many years the ruins of Granville Knox’s dream home stood on top of the hill, open to the elements. In later years when the land was divided by the land comission and the burnt out shell came in to the ownership of a local family. In January 1978, they began to restore the house and over the following years they succeeded in re-roofing the entire building. In November 1997 a new owner sought permission to convert Errew Grange into apartments and a full restoration of the interior of the building was instigated. In the year 2000, fourteen luxury apartments were offered for sale seeking offers in the region of £130,000 to £205,000. 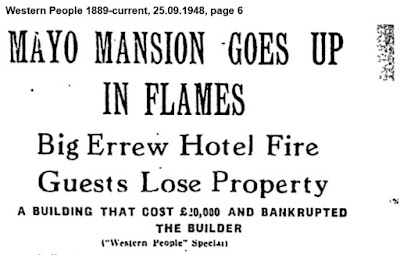 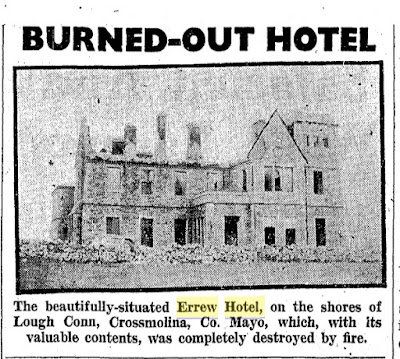