The Lost Castles of Monaghan 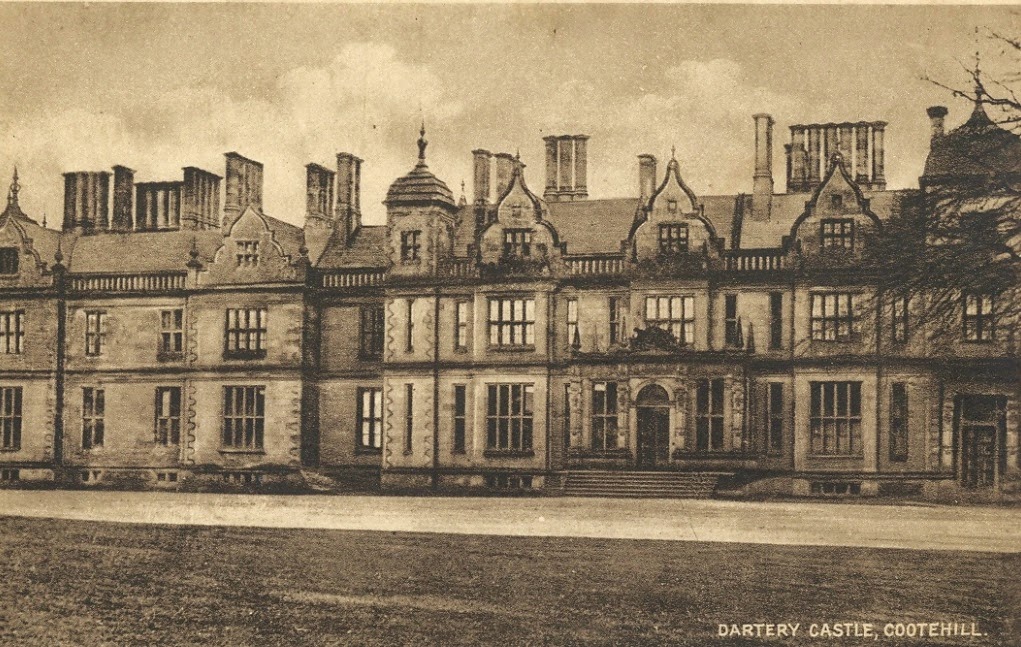 Oscar Wilde once said ‘to lose one parent may be regarded as a misfortune, but to lose both looks like carelessness’. The same could be said of County Monaghan and its castles, for my first book I was developing two chapters about two wondrous architectural creations in Monaghan. However imagine my surprise to discover that absolutely nothing of these great buildings remain but a few steps, outbuildings and gate lodges. The first of these is Dartrey which was completed in the midst of the Great Irish Famine in 1847. It was originally designed to extend and incorporate a house from the 1770’s known as Dawson’s Grove, with the old and the new house being divided by a substantial wall. The house cost its owner, Richard Dawson, who later became the first Earl of Dartrey, £30,000. It was a vast Elizabethan Revival mansion and the architect chosen for these improvements was William Burn. The house had a very long facade with legions of mullioned windows, oriel windows, Tudor chimneys and curvilinear gables. 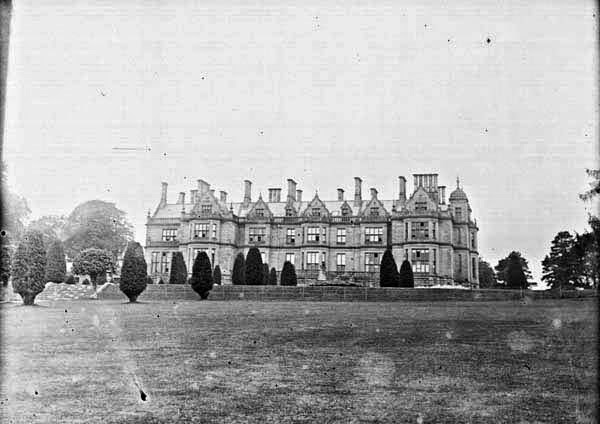 The garden front sat atop a two level terrace facing onto Lough Dromore.
( Picture from the collection of the National Library of Ireland )

In March 1856, a fire is believed to have destroyed the original part of the house which would have been the Dawson’s Grove section. The fire broke out in the roof as a result of a defective chimney and completely destroyed the north-eastern wing. Furniture, pictures and statues were saved as numerous people fought to bring the fire under control. Rooms lost in this fire included the drawing room and her ladyship’s boudoir. The house was insured and the damaged section was replaced, as a result the house that now existed was a totally ‘new’ house that contained nothing of the original Dawson’s Grove.

The out buildings were constructed about one mile from the house, they were built of red brick with cut stone details and laid out in a semi-circle around a cobbled yard.
(Picture by Ellie Ross)

A major change took place in the finances of this house and family in less than 100 years after its completion. The last owner of the house was Lady Edith Windham who was the daughter of the second Earl of Dartrey, Vesey Dawson.  Vesey Dawson, the second Earl of Dartrey died in June 1920 after a long illness at Dartrey. He was born on the 22nd April 1842 and succeeded to the Earldom upon the death of his father in 1897. He married Julia daughter of Sir George Orby Wombwell in 1882 and had two daughters. During the First World War, he and Lady Dartey produced large amounts of vegetables in the gardens and terraces that surrounded the castle. He was succeeded to the title by his brother Hon Edward Stanley Dawson born in 1843. Lady Edith Windham, the grand daughter of the first Earl disposed of the house contents in 1937 with a four day sale which included a number of paintings by El Greco, Zoffany, Reubens and Coates. A broadcasting or speaker system was used so bidding could be heard in the different rooms of the house. Also included in the auction were 5,000 books from the library, it is un-imaginable that one house could contain so many books but these were all contained in one room. There auction created a bit of a stir in the antiques world as buyers travelled from Dublin, Northern Ireland and Great Britain with special buses put in place to ferry expectant bidders to and from the castle. Lady Edith had previously moved in to the Stewards Cottage and a number of years after the auction she then made arrangements to have the house demolished. Therefore the man that originally built the house was only separated from the lady who demolished the house, by only one generation. In March 1946, the demolition sale of the castle was advertised and consisted of 500 lots which included beams, flooring, rafters, moldings, skirting’s, the solid oak staircase, oak doors, window casings, brick, 5,000 slates, mantelpieces in white and cream marble. The sale handled by Samuel Brown, an auctioneer from Monaghan. Lady Edith claimed she had no option as the rates were too high and a buyer was not forth coming. A company from Dublin called Hammond Lane Foundry were engaged to carry out the destruction of this architectural masterpiece; however one imagines they were more interested in the lead in the roof than architectural salvage. The process of demolishing the family seat supposedly made Lady Edith a profit of £3,000 but one wonders if this figure could be considered a profit, when it cost her descendant ten times that amount to build the house in the first place.

One of the few elements that survive today and give some impression of the architectural splendour of the original house is the Dawson Mausoleum which recently underwent a spectacular restoration. The Mausoleum was built to commemorate Lady Anne Dawson who died in 1769 and contains a life sized marble sculpture of the deceased, her husband and son gathered around an urn that contained her ashes. The domed building that contained this sculpture was designed by the architect James Wyatt and was situated in the demesne that once surrounded Dartrey. Over the years the building became derelict and the sculpture was vandalised, with pieces of the statue being broken off and stolen. Now that the Mausoleum is restored a recent appeal has located the head of one of the statues in Dublin. However the hands, feet and angels wings still remain at large. 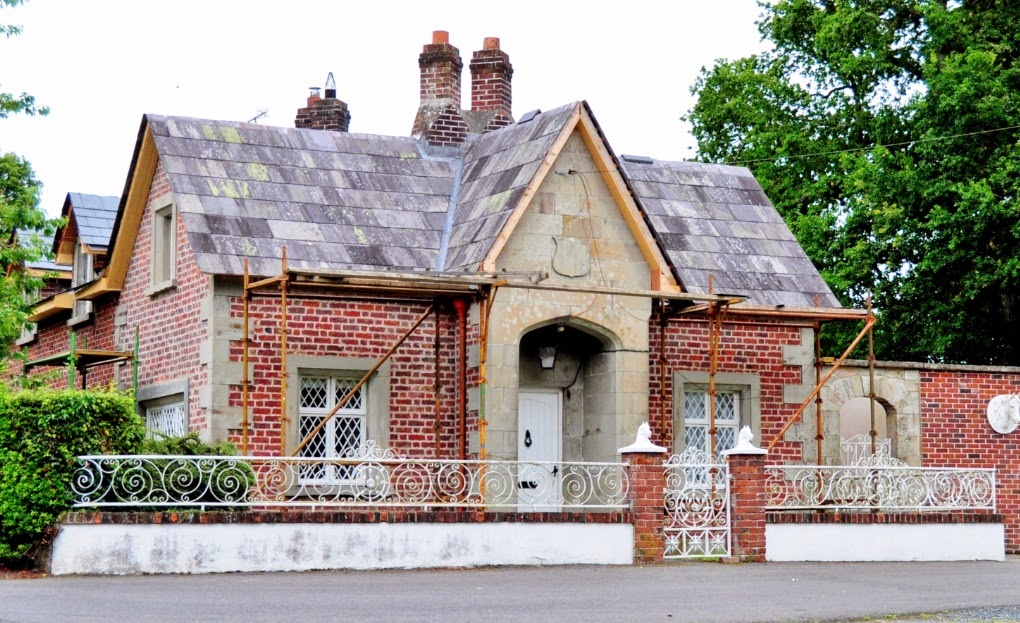 The second architectural jewel lost to the county of Monaghan was Rossmore Castle whose decline was hastened when it developed dry rot. This castle, as can be seen in the pictures, was something akin to a Walt Disney creation with its towers and turrets. 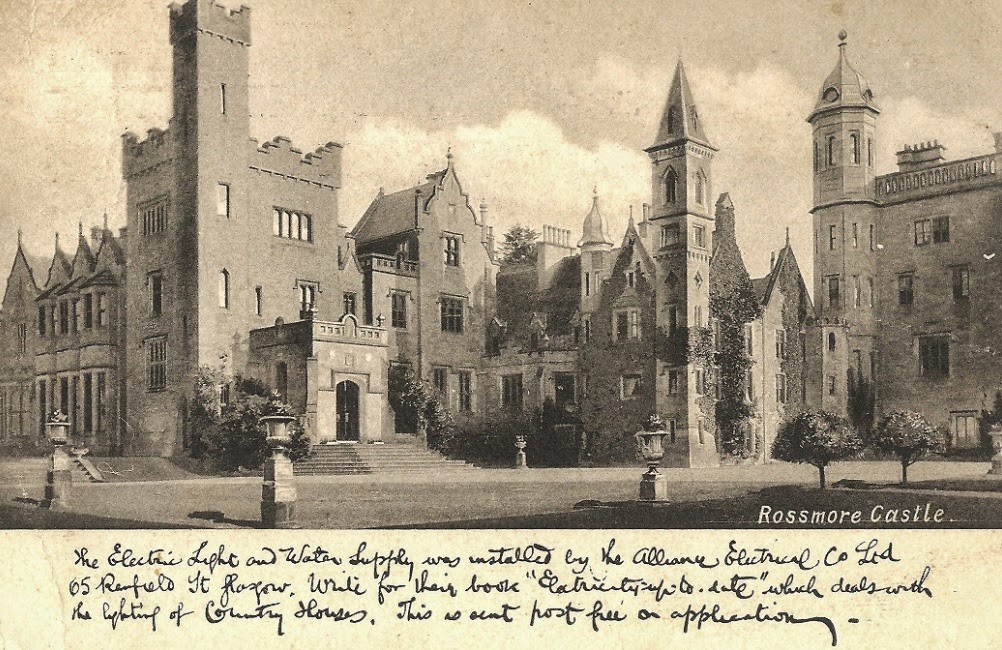 
A succession of extensions in order to claim the title of the largest drawing room in Monaghan enlarged the floor area of the castle over the years. Rossmore Castle was a large Tudor Revival house built in 1827 to the design of William Viturvius Morrison for the second Lord Rossmore. In 1825, Richard Morrison was engaged in producing plans to rebuild the house then known as Cortolvin Hills for Lord Rossmore.  In 1854, William Deane Butler produced plans for remodelling the house but these were not executed. The house was altered and enlarged 1858 to the design of William of William H. Lynn. Eventually the combined changes and additions resulted in a building with three towers and over 117 windows in 53 different shapes and sizes. One feature of the house was its drawing room which enlarged on a number of occasions due to Lord Rossmore competing with his neighbour Mr. Shirley of Lough Fea to have the largest room in the county. A competition Lord Rossmore eventually lost. 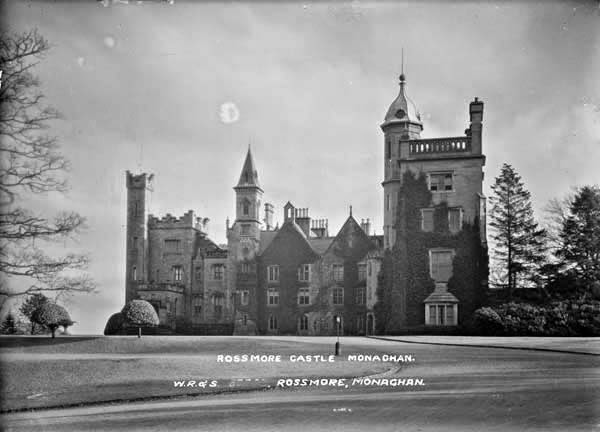 The early 1900’s the Rossmore’s seemed to have a run of bad luck. It was reported in August 1906, Lord Rossmore was ill in the castle and was confined to his room for the previous week. He had intended to go to his large, recently built, shooting lodge on his mountain. In April 1907, Lord and Lady Rossmore’s eldest son William was injured while mounting his pony near the castle. The pony bolted, William’s foot became entangled in the stirrups and he was dragged for some distance. He suffered a fractured skull and a broken leg. However a happy event was recorded in 1908 when the Duke of Connaught paid a visit to the castle. He again returned in 1909, where he stayed overnight and then travelled to Lord Rossmore’s mountain in Glasslough for grouse shooting.  In the early part of the twentieth century Rossmore remained unoccupied for long periods as the fifth and sixth Barons decided to live in England which resulted in the uncontrolled spread of dry rot. The Rossmore Family made a valiant attempt to brave the dry rot at Rossmore but when the mushrooms appeared on the drawing room ceiling it was hard to make any guests believe they were there for decorative purposes. The time came for them to abandon the castle for another family property when they had to ask their guests to wipe their feet on a disinfected mat so not to spread the spores of the dry rot. One wonders if it was the social embarrassment or the actual dry rot that led to the demolition of the house. In May 1946, contents of the castle advertised by Battersby & Co and that they had been removed to the Dower House, Camla, Rossmore Park. The auction which was to take place included antique furniture, Chippendale Mirrors, oil paintings statues, tapestries, china, carpet chandeliers and of course the obligatory billiards table. The oil paintings included works from Dutch, English, Flemish and Italian schools and comprised of portraits, battle scenes and landscapes. Now with the castle denuded of its contents, a demolition sale took place in September 1946 and lots included joist, rafters, bricks, slates, fireplaces, doors, windows, shutters, water tanks, bathroom fittings 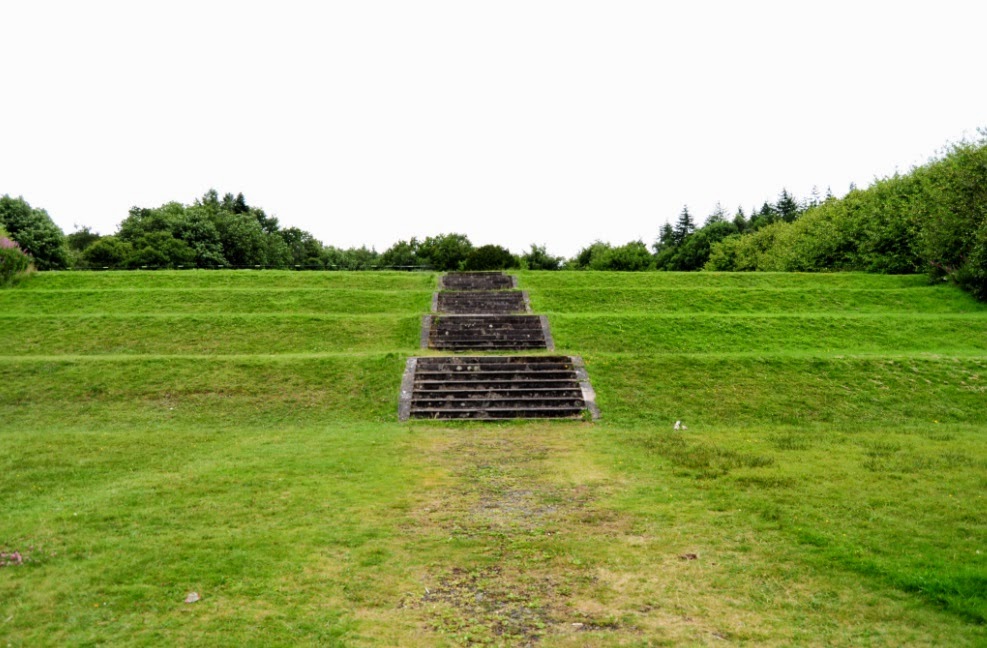 The house remained unoccupied, was unroofed during the Second World War and finally demolished in 1975 and the grounds of the castle were sold to the Irish State in the 1960’s. The family moved to a nearby dower house called Camla Vale after the castle became uninhabitable due to the dry rot. The dry rot spores are believed to have traveled in the corks of the bottles from the wine cellar of the castle and as a result their new home also became infested.  Today Rossmore is a public park with only a few elements such as the entrance steps and terraces of the castle surviving. 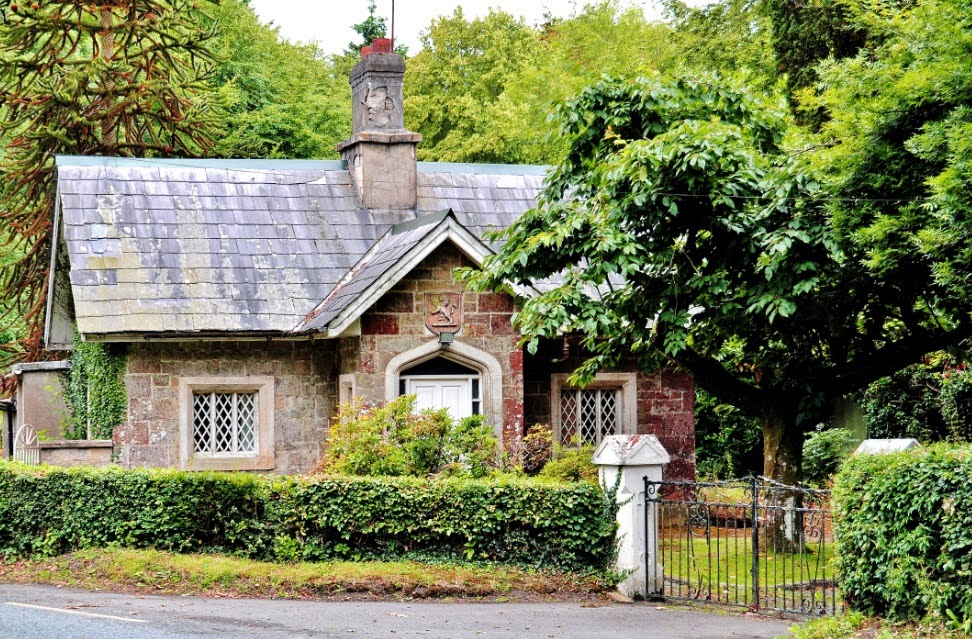 The Gate Lodge of Rossmore
(Picture by Ellie Ross)
Posted by David Hicks at 03:49