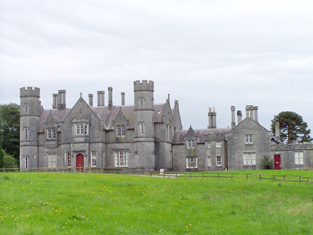 Please click on the above link to see the current state of Carrigglass Manor in Co. Longford. The ancestral home of the Lefroy family. This weekend I was signing books at the Adams Country House Sale at Slane Castle and I had the pleasure of meeting its former owner Jeffery Lefroy who sold the estate in 2005. A number of items in the auction were some of the original contents of his former home in Longford which he was now reluctant to sell, however needs must. Jeffery was saddened by the current state of his former home which is now in the hands of Nama who are doing very little to protect the structure. The developer who purchased the property had the intention of developing a hotel in the house and building houses in the grounds of the estate. Neither of these enterprises succeeded and now the whole estate is a desolate place. 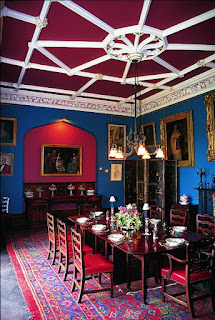 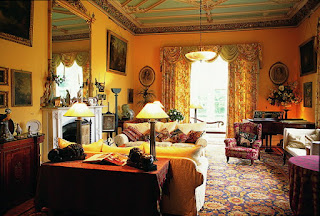 The Drawing Room
Located five kilometers north of Longford Town on the T15 stands stately Carrigglas Manor. A once beautiful Gothic Revival style Manor house built by Thomas Lefroy in 1837 and was the Lefroy family seat until 2005. Chief Justice Thomas Lefroy who built the house was a one time love of the novelist Jane Austen, it being frequently suggested that the character Darcy in Pride and Prejudice was modelled on him. Carrigglas Manor was built to designs by Daniel Robertson (died 1849). The stableblock situated near the house was designed by the famous architect James Gandon. However these structures are not protected by the state and are now falling into dereliction, how can this be allowed to happen. Have we not learned from the mistakes from previous generations, do we have to wait for Carriglass to be be a roofless ruin before we lament its loss? Action needs to be taken now.