Carriglass in Longford is for Sale 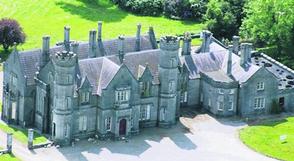 Yesterday when I seen that Carriglass Manor was for sale it reminded of when I met the original owners of this house at my book signing in Slane Castle a few weeks ago..  The developer that purchased this estate a number of years ago has left the main house in a terrible condition with half built houses and a hotel in the grounds. This house is an architectural jewel and has connections with Jane Austin.

Back in 2004 it was unveiled as the site for a new €100m tourism project which would have been the largest of its kind in Longford. Now the 605-acre Carrigglas Demesne is being put up for sale in the hope that a leisure operator might come up with a new vision or a farmer might return it to its former glory.


About two-thirds of the land is in farmland, parkland or mature woodland with the remainder containing buildings or various stages of the development with its Retief Goosen designed golf course. Agents Lisney have not declared a guide price.

That average price was below the average of €7,500 per acre which smaller tracts of good land made in the county last year.

At an average round price of €5,100 for farmland, Carrigglas could generate bids of around €3m, but about a third of the land is in various stages of development which means the value really depends on the ambitions of possible buyers.

Carrigglas is located only 4km from Longford town and it benefits from an attractive 11-bedroom manor house.

Two of the other five houses are in reasonable condition, while three of them, gate lodges, need refurbishment.

A 96-bedroom wing for a proposed hotel has been partly-built, as have 37 courtyard houses beside the R194 route, 59 village houses and a 21-hole championship golf course.

Foundations have been laid for a golf clubhouse. It also benefits from stables designed by the famous architect Gandon.

Lisney has set December 7 as the closing date for expressions of interest.

Originally the Kearns family company, Kearns Developments, had envisaged the leisure attraction including a four-star hotel, a romantic woodland walkway and a selection of exclusive homes.


In 2006, the then Finance Minister Brian Cowen performed the sod-turning ceremony for what its developers hailed as "one of the most important developments ever to take place in Longford".