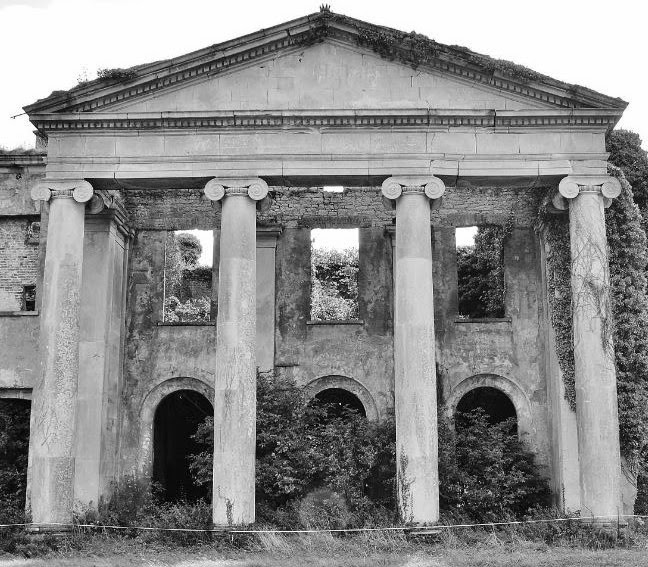 House is a superb example of a neo-classical mansion that is situated near the of in . Modern houses have sprung up like trees around the ruined mansion shielding it from the view of any curious passer by. Over the years I have seen many pictures of its impressive portico and I am saddened to see it is showing signs of distress and possibly collapse. This entrance portico is one relic that echoes the glories of ’s illustrious past and the beauty of the interiors that once existed within. Now that the roof is long gone, its interior is a mass of brambles, trees and weeds. The house which was built in the mid-eighteenth century has seen its far share of colorful characters pass through its doors. This mansion once sat at the centre of a 900 acre estate, its parkland surrounded by woodland that kept the mansion at its heart free from prying eyes. The compound that surrounded contained the necessary facilities essential for the upkeep of any big house and its occupants. These expansive ancillary buildings were made up of servants’ quarters, outbuildings, green houses, laundries and the house even had its own plant to produce gas to illuminate its many rooms. The gardens and surrounding parkland were landscaped by John Sutherland, one of the eminent landscape gardeners of his time. In order to maintain a house and gardens of this size, an army of indoor and outdoor staff were employed. The produce in the kitchen garden supplied the house with fresh vegetables and the green houses, heated by hot water pipes, supplied exotic fruits like peaches and nectarines. In front of the large portico there was a large gravel turning circle which would allow the carriages to arrive and turn in a dramatic fashion. 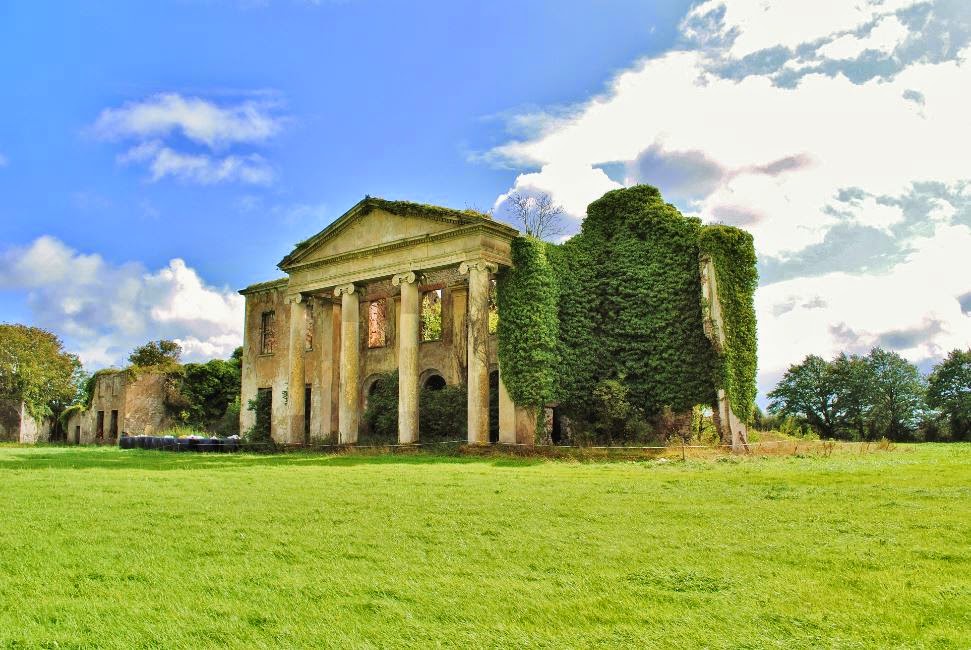 While the portico of remains unchanged, whole sections of the side of the house have collapsed leaving the desolation of the interior exposed.
Accreditation- Picture by David Hicks 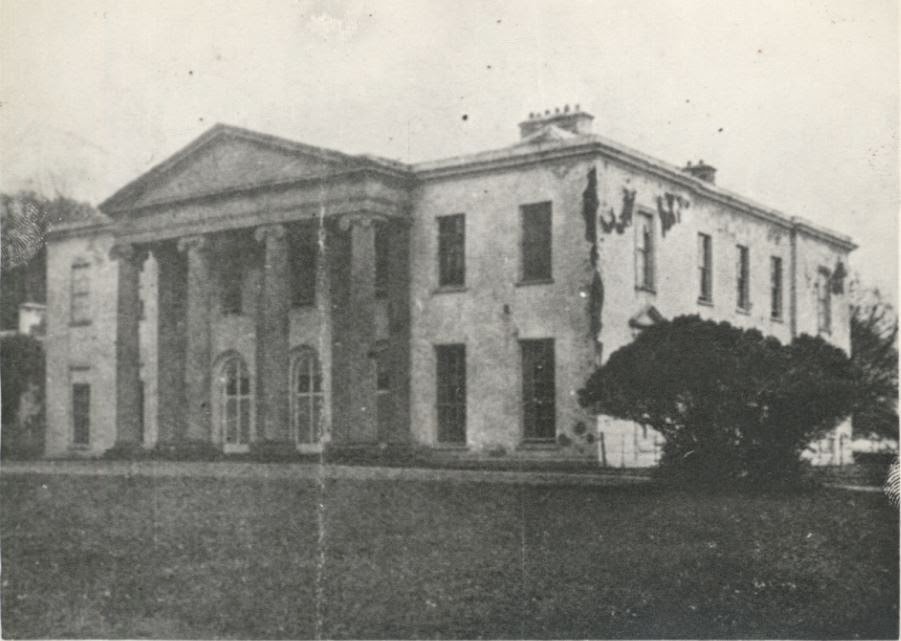 The house was built by a gentleman with the unusual name of Silver Oliver and was constructed over a number of years before finally being inhabited in 1750. It was soon afterwards purchased by the White family and eventually came in to the ownership of John Fitzgibbon by 1765. John was a man, who, after initially exploring the option of a career in medicine decided to abandon it in favour of law. As a result of the Penal Laws of the time it was necessary for him to change his religion from being a Catholic to a Protestant in order to allow him to practice in the Irish Courts which debarred Catholics. He became very successful in his chosen field and died in 1780 a rich man. was inherited by his son also named John who had also excelled in the field of law and specialized in cases of a political nature. In 1780 John was elected to the Irish Parliament as a university member for and in 1783 he became Attorney General. Three years later in 1786 he married Anne Whaley in . By 1795 he was made the first Earl of Clare in connection with the passing of the Act of Union in 1801. 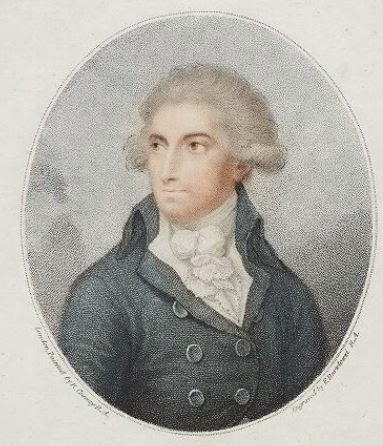 John Fitzgibbon, 1st Earl of Clare
( From the Collection of The National Library of Ireland)

This support of the Act did not carry favour with the general public and his life was often under threat. His home at was attacked and one of his servants was murdered. In 1802 he died and as his coffin was being lowered in to the grave, a dead cat was thrown in by someone who was in disagreement with his previous comments regarding the Act of Union. He had once said “that he would make as tame as a mutilated cat” hence the appearance of one at his funeral. was now inherited by his son who became the second Earl at the age of 10. He attended school at Harrow in and then proceeded to . He married the Honorable Elizabeth Julia Georgina Burrell in 1826 in Surrey . He was appointed Governor of Bombay between 1830 and 1834 and he held the office of Lord Lieutenant for between 1848 and 1851.

In 1813 an architect named Lewis William Wyatt prepared designs for the addition of a portico to the house for John Fitzgibbon, second Earl of Clare. It is believed that a man by the name of James Pain may have supervised the work. In 1840 James Edward Mc Connell supervised the erection of several horticultural buildings and a great deal of machinery at Mount Shannon. The house which had been enlarged by the first Earl was subsequently remodeled and decoratively enhanced by the second Earl in the 1850s. During his life the Earl traveled the continent and used this opportunity to furnish with works of art. As he made his way across Europe, crates and wagons returned to his estate in stuffed with marble and bronze statues, paintings, furniture and rare books. When he died in 1851 in , , the title and passed to his brother Richard Hobart Fitzgibbon, who became the third Earl of Clare. 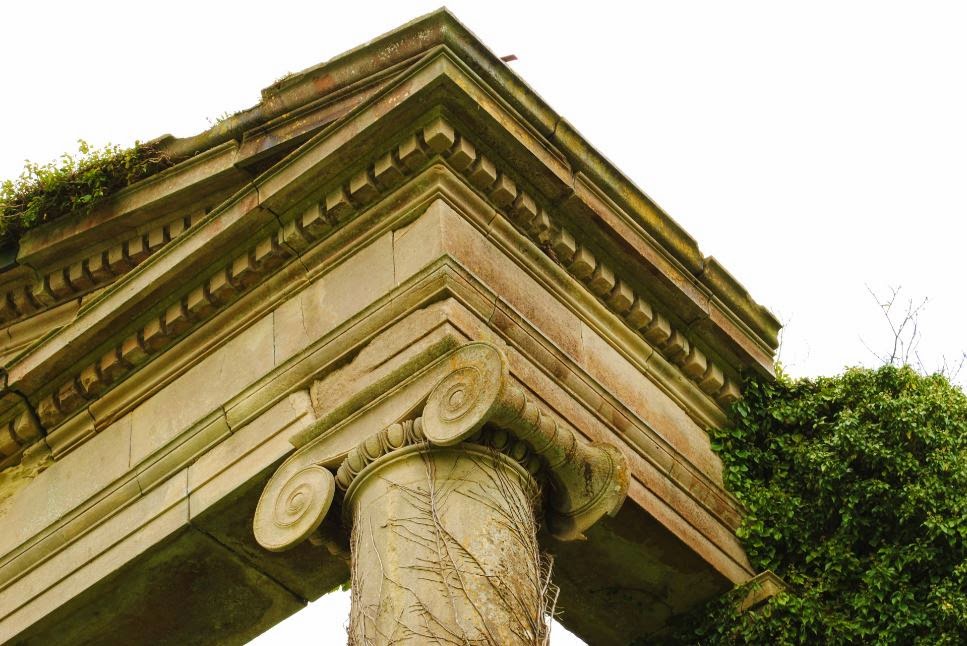 It was Richard’s daughter Louisa who eventually became chatelaine of in 1864 and by the 1870s her estate extended to over 10,000 acres in Limerick and over 3,000 acres in .  After the death of her first husband in 1880, Lady Louisa lived beyond her means and entertained on a grand scale. This feckless spending meant she had to sell the contents of ’s library in Sotheby’s in 1866 to keep creditors at bay. She thought her financial woes were over when she met the General Carmelo Ascene Spadafora, Marchese della Rochella. As Louisa entertained on such a lavish scale her potential suitor was under the impression that she was a rich woman and would be in a position to pay off the debts on his estates in . Lady Louisa, on the other hand believed that the vast estates that the Marchese owned and bragged about in would keep her in the lifestyle to which she had become accustomed. It was only after a party to celebrate their engagement in that sheriffs arrived to seize some of the mansions contents to settle outstanding debts. The game was up and there in front of the assembled local gentry, Lady Louisa and the Marchese both realized that they were penniless. They still went ahead with the marriage to save face as bankruptcy was frowned upon socially but a broken engagement was an entirely different matter. The couple married in May 1882 and the newly weds tried to keep the façade of being wealthy. The lavish entertaining came to an end and they soon found that their fair weather friends abandoned them. After the death of her second husband and with creditors looking for payment, Lady Louisa sold the entire contents of the house in 1888. A catalogue that exists from the auction gives an idea of what the eclectic interiors of Mount Shannon House contained. Items for sale included a bronze model of the state carriage built by Godal for the Earl of Clare in 1800, crimson damask window curtains and a statue of Vishnu that sat on the staircase. Everything went under the hammer from the contents of the kitchen and servants quarters to the full size billiard table.  The sale followed a judgement against Lady Louisa in a court case and a Henry Unwin was appointed the receiver of her estate. Lady Louisa left to spend the remainder of her life on the where died there in June 1898. 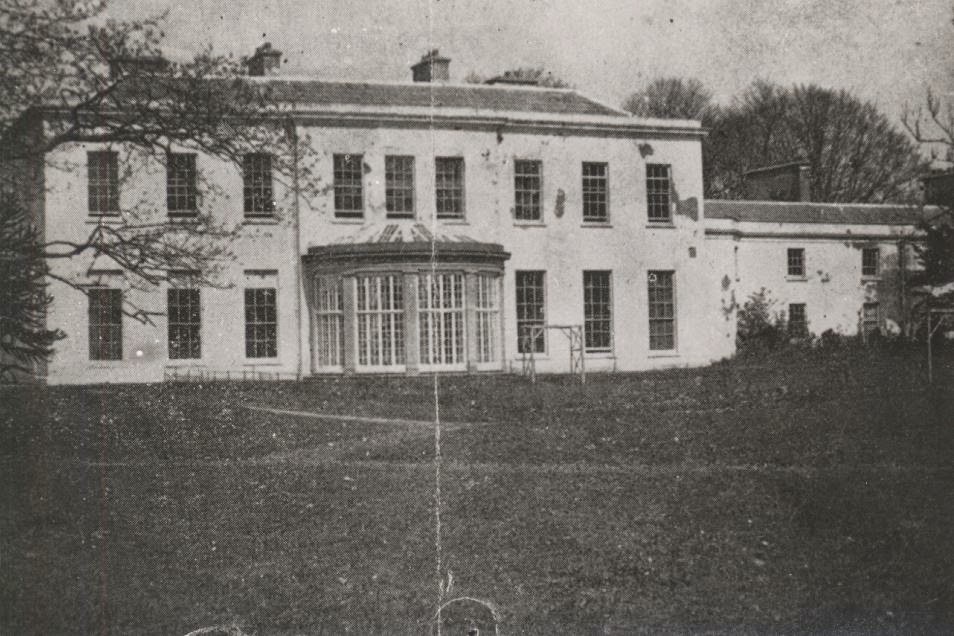 The beautifully ordered rear elevation of the house with its curved conservatory that extended out from the façade overlooking the well maintained gardens.
Accreditation- Picture from

On the May 27, 1890 under the direction of La Marchesa della Roccella a.k.a Lady Louisa Fitzgibbon, Mr. F.W. Mc Carthy offered the Mount Shannon Estate for sale. The estate comprised of the mansion house, pleasure grounds, gardens, farm buildings, offices and 947 statute acres of dairy pasture, meadow lands and wood land. The estate was broken down into eleven lots, with lot number 4 comprising of the house, out buildings and forty-two acres. The house is described as having sixty rooms, elegantly appointed and “fitted in the highest decorative art”. The brochure for the sale also states that a hydraulic ram provided the house and grounds with an abundant supply of water and the domestic lighting was provided by a miniature gas works. The house had three gate lodges together with dwellings for the land stewards and gardeners. The house is listed as having spacious front and back halls, drawing room, boudoir, library, dining room and a study which had beautiful views of the of the parkland. The upper rooms were accessed by a Portland stone staircase together with two additional back staircases for the servants. 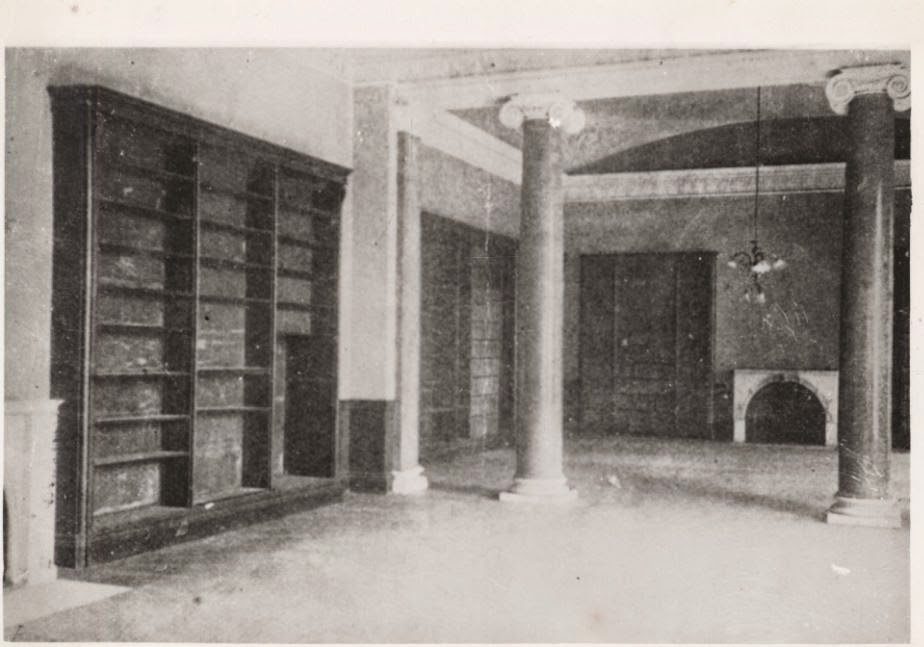 The house remained empty for a number of years when it was purchased by an Irish American named Thomas Nevins in 1893. Nevins who had made a large fortune in returned to with his wife and three daughters. He was originally from Mayo and had emigrated to in 1864. After working as a contractor he eventually purchased a quarry which laid the foundations of his wealth. He graduated into the development of town tram systems and railroads in and by the time of his death he was a large shareholder in electric traction, railroad and gas companies in . The family did not have much luck living in and met tragic deaths during their tenure of the house. An ice house on the estate became the family’s mausoleum and in The Irish Tourist Association survey of 1942, three massive coffins were to be found in the former ice house.  Thomas Nevins died of heart failure in in August 1902. High Mass was held in the drawing room of the house with his burial afterwards in the improvised family vault. His passing was of such importance that it was reported in the New York Times in August 1902. After his death the estate was owned by his wife Esther until her death in 1907. In the census of 1911, a 21 year old American called Robert Marshall is living in the house with his Irish born wife. Judging by the presence of jockeys, grooms and horse trainers, Robert must have been running some kind of equestrian related enterprise at . The estate was eventually divided up by the Land Commission and the house was purchased in 1915 by Mr. D. O’ Leary Hannigan from Co. Cork for £1,000 plus fees.  When the house was sold in 1915 the following description was provided of the house which was made up of five reception rooms which included a library 60ft x 21ft, a lofty hall with handsome staircase that led upstairs to the twenty-two bedrooms, five dressing rooms, bathrooms, and lavatories. The house had excellent domestic accommodation and the residence was now wired for electric light. The out buildings included three workmen’s cottages, gardens of six acres and ornamental planted grounds. The house when sold at this time was described as being potentially suitable for a school, college, institution or suitable for a religious order. House was burnt down on the night of Monday June 14, 1920 and has lingered in this ruined state since.

Many beautiful trees that have survived still dot the parkland surrounding the house.   even in its ruinous state still commands attention from any curious passer by.
Accreditation- Picture by David Hicks