The home of Dr. Kathleen Lynn
A Revolutionary Doctor in many ways 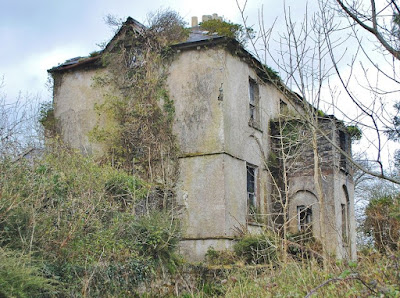 Today a house with a strong connection with Dr. Kathleen Lynn, one of the central figures of the 1916 Rising, lies forlorn and forgotten in Mullafarry near Killala in Co. Mayo. It appears its historical significance is only recognised when it becomes a useful tool, used in objections to wind farms and possible land fill sites nearby. While newspapers and  museums extol the virtues of this heroic individual, Dr. Katheen Lynn, this house languishes in decay and is easily bypassed despite its proximity to a road. Another degradation to the history of this house, is that it is widely and incorrectly reported, that Kathleen was born in Cong instead of this house near Killala. However despite the historical connections this house may have, it is an architectural masterpiece in miniature and should not be allowed fade away like an old photograph. The care, attention and craftsmanship that was employed in building this house is evident in the wonderful detail that still abounds upon its walls. 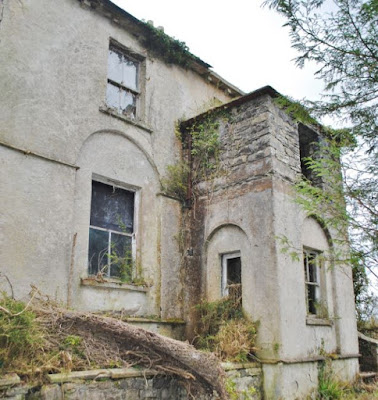 The beautiful detail of this building that lies hidden was designed in 1815 and remarkably the original architectural drawings survive today.  Picture Copyright ( above) ICHC and ( Below) The Architectural Inventory of 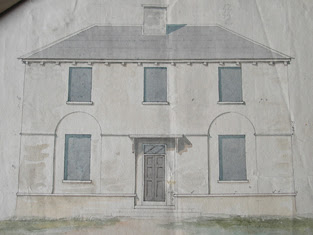 The childhood home of Dr. Lynn was once an attractive detached two storey over part raised basement residence designed in 1815 and built in 1820.  It was built as a residence to house the Rector of the local parish hence these houses were commonly known as rectories. The house was L shaped in plan and was erected with financial support from the Board of First Fruits. The design of the house received the approval of the Reverend James Verschoyle, the then Bishop of Killala. 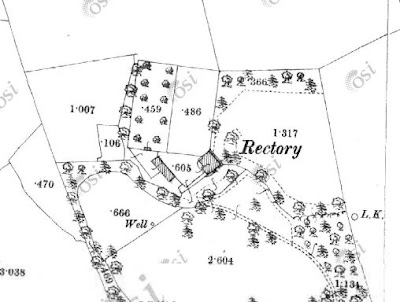 In the once manicured grounds, that surrounded the house, could be found a handsome stable block or coach house and a substantial walled garden to the rear. A large window overlooked the walled garden but was blocked up, possibly due to the infamous window tax. In the 1860's, the architect, William Edward Martin, an ecclesiastical architect is recorded as carrying out minor alterations to the house which may have included the addition of the porch as it does not appear on the original drawings.

In the 1870's, Mullafarry Rectory became the home of Reverend Robert Young Lynn when he became the rector of the local parish, he had been ordained previously in 1866. Robert Young Lynn is recorded as having being married in 1872 in Rathdown. Kathleen Florence Lynn was born in Mullafarry in January 1874. In her witness statement about her activities in 1916 the place of her birth is mistakenly spelt as 'Mullaghfarry in Mayo, two miles from Killala'. She was the second child to be born to Reverend Lynn and his wife Catherine Wynne, who was from . The family lived at Mullafarry until 1882 after which they moved to Ballymahon in Longford. In 1886, the Lynns moved to Cong when Kathleen was 12 where her father remained as rector until 1923. In 1892, Kathleen came second in examinations for women at , followed in 1895 when it was reported that she passed her examinations in the Royal College of Surgeons. By 1899 she had qualified as a doctor and by 1904 had set up a practice in Rathmines, . It must be remembered at this time a woman becoming a doctor was a rare endeavor and some hospitals had a policy of not employing female doctors.

In around 1912, Kathleen's first encounter with one of the leading figures of the 1916 Rising was with Constance Markievicz, when she asked her to visit a lady who was ill. Kathleen records that Constance Markievicz, formerly Gore Booth of Lissadell, was a distant cousin of hers, through her mothers size of the the family, the Wynne's from Sligo. Over the years leading up to the Rising, Katheen became a great friend of Constance Markievicz and described her as 'a grand soul'. The lady who Kathleen was caring for at this time was Helena Maloney who came to live with her while she recuperated. They often had long conversations and she is credited in converting Kathleen to the National Movement to regain Ireland's freedom. From 1913, she gave lectures to the members of the Citizen Army and Cumann na mBan in First Aid, she says that she never drilled with other volunteers and had 'no time for that sort of thing'. About two weeks before the Rising, James Connolly, asked her to take him to Howth in her car so a suitable place could be found for the Germans to land. As the date for the Rising drew close, Dr. Lynn's car often ferried large quantities guns to Liberty Hall while her house was also used for the storage of guns and ammunition. It amused her that her neighbors had little idea of what was going on in her house. On Holy Thursday, the Citizen Army in gratitude for her help in the preparations for the Rising presented her with a gold brooch and the ladies of Cumann na mBan gave a set of inscribed silver candlesticks....all very civilized.

During the 1916 Rising, Kathleen was the Chief Medical Officer in the City Hall Garrison in . After City Hall was captured by the British, Kathleen was taken to Ship St. Barracks and detained which was followed by time spent in Richmond Barracks, Kilmainham Jail and finally Mountjoy. After a number of weeks in Mountjoy, Kathleen states that she was 'deported to England' after representations made by her family. She says at this time that she was ' was supposed to be a sort of lunatic'. In July 1916, a question was put to the House of Commons, when a request was made to the Home Secretary to allow Dr. Lynn to return to Cong in Galway. Kathleen wished return home to care for her sister who was seriously ill due to typhoid fever. It is interesting to note that Dr. Lynn was ' required to reside in this country in Bath' however permission was granted. In 1918 an order was made directing the internment of Dr. Lynn. Representations were made by the Dublin Lord Mayor to allow her to continue to carry out her work due to an influenza epidemic if she abstained from politics. She would be released if she signed an undertaking saying she would not take part in any future political ventures and that she remain in the Dublin area. After caring for her sister she returned to Bath but eventually made her return to Dublin for good. On her return, she started a shirt factory to provide employment for the girls involved in the Rising but this was not a success. She then became vice president of Sinn Fein and was elected a T.D. in 1923 but lost her seat in 1927. She was instrumental in the setting up of St. Ultan's Hospital in for the care of sick children due to the high mortality rate of young children in the city at this time. She died in 1955 and is buried in the family plot in Deansgrange cemetery in .


Over the years the rectory at Mullafarry became the home for many men who occupied the post of rector for the nearby parish. In 1901, Rev. John Perdue aged 46 and a native of is recorded as living in the Rectory at Mullafarry with his wife Mary Isabella, aged 45, born in . Also resident in the house were their sons Henry and Cecil together with Mary Quigley, a servant. The house at this time is listed as extending to 14 rooms. By 1911, Rev Perdue and his son Ernest are living in the house, with a niece named Elsie Bollard and a servant by the Norah Lowin. In August 1916, Mrs. Perdue sent an invalid chair to the Dublin Castle Red Cross Hospital, which was set up for troops wounded on the front lines during the First World War. In March 1925, an auction of the contents of the house was advertised under the instruction of Rev. Perdue. In the advertisement, the house is described as having a hall, drawing room, dining room,3 bedrooms, together with a kitchen and store room in the basement. Rev. Perdue's wife had died in 1924 and is buried in the nearby churchyard where she was joined by her husband in 1946. In January 1933, Rev. Francis Kenny died at Mullafarry Rectory and had been rector of the Parish since 1929. In that same year, the contents of the house were announced for sale under the instruction of his wife. 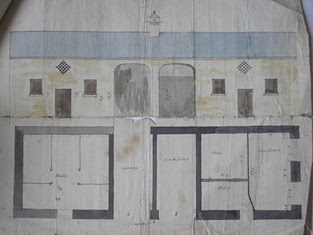 The falling population resulted in the closure of the local church and the rectory passed into private hands. Eventually it formed part of a bank of land purchased by the Asahi plant which was built nearby. This resulted in the building becoming unoccupied and began its decent into disrepair. In April 2000, it looked like a possible saviour had been found for the house when it passed into the ownership of Mayo County Council. In September 2015, the heritage officer with Mayo County Council suggested that it was possible to secure the building for around €70,000 which would arrest further decay and damage. It was also added that a conservation engineer was being appointed to compile a full report on the house. Some supports have been put in place to secure the structure however a better effort could be made to secure window and door opes from curious onlookers. A number of tress and vegetation are attacking the buildings and the walled garden has been decimated by falling trees. While it would be commendable to make this house a museum, the possibility of this happening is remote. Perhaps Mayo County Council should consider putting this house on the market in the hope that a private individual may save this house.