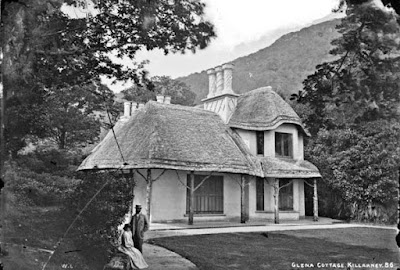 The picturesque Glena Cottage Co. Kerry, Ireland
Picture from the collection of The National Library of Ireland 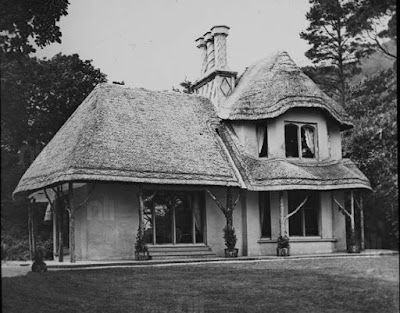 Glena Cottage in Co. Kerry was an example of a Cottage Orne  which was once found at the base of the mountain from which it took its name. A Cottage Orne was a popular building on Irish estates in the 17th and 18th century. Some were designed so that they could  be lived in, but their usual purpose was some where to be visited on a walk during which a meal could be taken and guests entertained.  Glena sat at the edge of the famous lakes of Killarney that afforded it panoramic views and made it one of the more popular cottages owned by the Earls of Kenmare. The picturesque two storey cottage had a thatched roof with overhanging eaves supported by trunks of arbutus trees. Adjacent to the cottage which was a separate structure called the ‘Ballroom’ or banqueting house used for larger occasions. The cottage was built by Lord and Lady Kenmare for the use of family, friends, staff and selected tenants of the estate. It is first mentioned in the 1820’s around the time it was possibly built. In 1823, it was said that the cottage was in an extreme state of neglect with its decoration being poor and dull, and a peasant was living in a hut nearby. Possibly because of its condition it was either rebuilt or extensively renovated around this time. Lewis, in 1837, mentions the elegant cottage of Lady Kenmare, at a short distance from which a banqueting house had been erected by Lord Kenmare for the entertainment of visitors. By 1850 the cottage is now described as being ‘a pretty little building, and tastefully fitted up’. 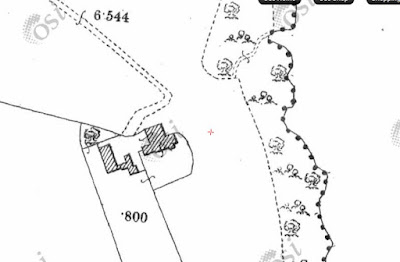 The site of Glena Cottage Co. Kerry illustrating the proximity of the cottage to the lake and the ballroom which was located to the rear of the cottage
Copyright OSI

The cottage became  known internationally, when in 1861 Queen Victoria visited Killarney and had lunch at the cottage. At Glena Cottage she was presented with a cabinet and desk, on the lid of which was representation of the Glena encircled with shamrocks an example of what is now known as Killarney ware, which is highly collectable. Both articles were designed by James Eagan and executed by three of his workmen Michael Fleming, Thomas Egan and James Lynch. Queen Victoria’s stay at the cottage lasted about an hour and a half while the lake in front of the cottage was crowded with boats. In anticipation of the Royal visit, the cottage had been redecorated with white chintz wall paper with a floral pattern. From here the Queen left on the Royal barge to tour the lakes. Queen Victoria was one of a number of Royals to visit to Killarney and Glena. In 1869, Prince Arthur who took tea at Glena Cottage and in 1885, the Prince and Princess of Wales took a trip on the lake which culminated with lunch at the cottage. Guests who were entertained at the cottage where usually met by a blind piper who played Irish tunes on his bagpipes. 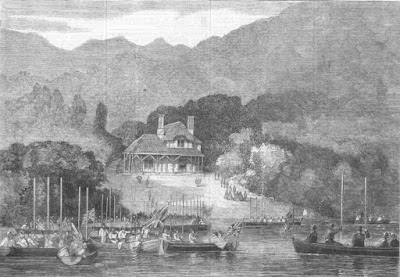 It was said that the Earl of Kenmare left the cottage open for public enjoyment and certain groups were given allotted times to use the cottage. In 1885, an excursion of police and young ladies were enjoying a dance in the cottage. Another group consisting of workmen had an allotted time to use the cottage and grew annoyed that the police officers overstayed their time. When it was suggested that it was time they moved on, the party of police officers locked the door and refused to move. As a result the workmen invaded the cottage and removed the officers by force. 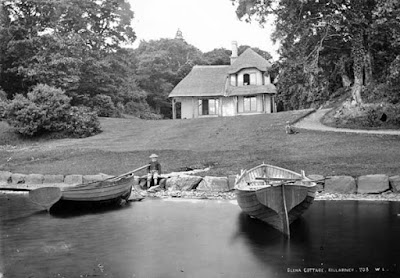 The location of the cottage meant that many people often arrived and departed
by boat which resulted in tragic circumstances in 1889.
Picture from the collection of The National Library of Ireland

Tragedy struck the inhabitants of the cottage in 1889, when a Dr. Finerty rented the cottage from Lord Kenmare. Dr Finerty and his wife, who were married a year previous, had their first child born at Glena. They had a christening party and invited a large number of people to celebrate at the cottage by the lake. A number of young men who attended the party over indulged and left the party by row boat which overturned. Among the five young men drowned, were brothers Joseph and Daniel Riordan who worked in the post office in Killarney. 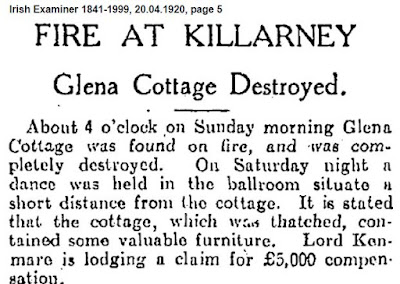 The end for this building came in April 1920 when Glena Cottage was found to be in flames at 4 o’clock on a Sunday morning. The previous night there was a dance held in the ballroom which was situated near the cottage. The cottage contained some valuable furniture and Lord Kenmare lodged a claim for £5,000. The fire started in the thatched roof and soon spread to the entire cottage, it was believed that the fire was started maliciously. When the caretaker got to the cottage the whole roof was ablaze, he broke into the door to the kitchen but found the interior of the cottage ablaze and beyond rescue.  The furniture in the cottage was valued at  £848 and the building at £2,150 but the Judge who awarded compensation granted £ 1,331. Today the ruins of Glena remain in the faint hope that maybe one day it will rise from the ashes. 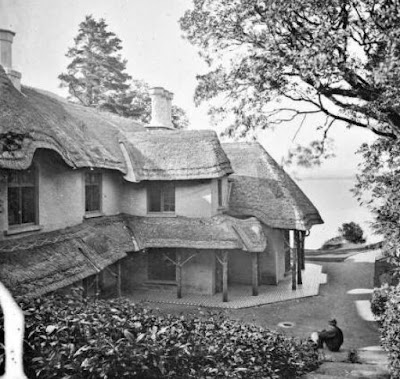 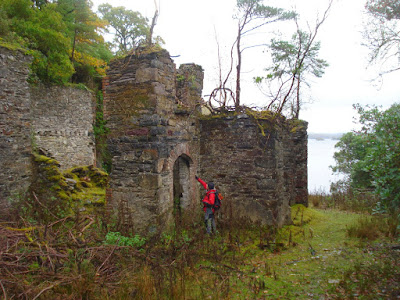 An image of what remains of Glena today
This image is from and remains the copyright of
http://howlingmist.blogspot.ie/2013/11/tomies-wood-and-glena-cottage.html