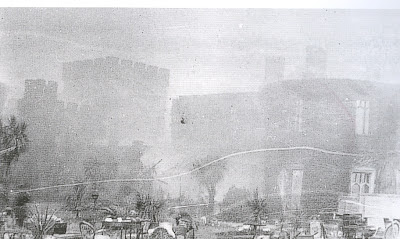 Castle Bernard, Bandon, Co. Cork the morning after the fire that destroyed it in 1921. The elderly Earl of Bandon was kidnapped and not released until three weeks later. On the lawn in front of the castle can be seen items of furniture still owned by the Bernard Family today.
Histories and photographs of this overlooked building can be seen in my first book
- Irish Country Houses - A Chronicle of Change
now published by the Collins Press, please find a link to their website below.
http://www.collinspress.ie/irish-country-houses.html
Also I will be in Bandon this Saturday 29th September 2012 at 2pm signing books in the local bookshop Bandon Books. The town of Bandon has always been influenced by the Bernard family and today decedents of the Bernard family still live in the grounds of Castle Bernard.
Posted by David Hicks at 12:10 No comments: 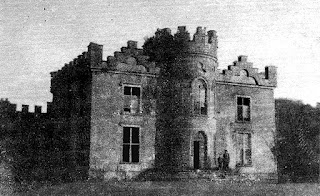 This grainy black and white picture was taken in the 1920s
is the only photograph that survives of the castle before
its roof was removed in the 1930s. 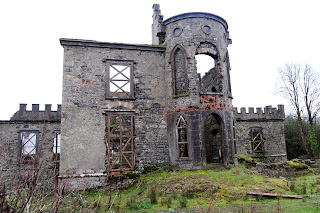 The entrance front of the castle has been decimated since some
of its materials were re-used in the building of a local school.
Accreditation- Photograph by Ellie Ross

A drawing of how the original exterior of the entrance front of Castle Neynoe
once appeared. The two-storey main block of the building had a projecting
central tower and was flanked on either side by single storey wings.
Accreditation- Picture by David Hicks

Castle Neynoe is not a large house in comparison with other mansions but should be recorded for the curiosity of having all the features of a castle but on a much-reduced scale. The house is described as a three bay, two-storey over basement mansion with a central projecting tower. The house was built on the site of an earlier castle or fort in the 1790s and was designed with a Regency Gothic influence. The facades of the house are decorated with crenellations, arched windows and gothic crosses together with hood mouldings above regular sash windows. It was designed by Robert Robinson and his signed but undated architectural drawings still exist today. A flight of curved steps that wrapped around the base of the projecting curved tower led to the front door of the house. Once inside you would have found yourself in an elliptical hallway with niches on either side of an archway that lead to the inner hall. This area of the house contained the main staircase that was lit by a tall window on the half landing. The house was made up of four reception rooms which included two drawing rooms on the entry level and five modest bedrooms on the floor above. An adjoining single storey wing incorporated a cellar while the basement of the main block of the house contained the kitchen. It is said that there was once a glasshouse attached to Castle Neynoe which was located on the south side of the house overlooking the wooded landscaped grounds. The rear of the building overlooked a courtyard that was surrounded by the various outbuildings that served the needs of the household. The entrance gates and lodge to the demesne still exist but like the main building, they are clinging to some vestige of their former appearance. Three sets of gates are arranged among four pillars, the large central gates provided access for a horse and cart while the smaller gates on either side provided access for workers, servants and the occupants of the gate lodge. The lodge has a hipped roof and is a simple building bearing little resemblance to the main house found at the end of the long winding avenue. Here, Castle Neynoe faced the mountains and overlooked the landscaped grounds that for a time included a lake which was drained in later years 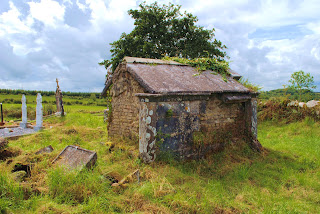 The ruined remains of the Neynoe family mausoleum in the
nearby Kiltycloghan graveyard. This monument which dates from 1828 should
be restored as many of its original pieces lie scattered on the ground.
The Neynoe family crest is featured on the surviving end of the structure.
Accreditation- Picture by David Hicks
Posted by David Hicks at 04:16 10 comments:

Castle Freke Mirrors turn up for sale in Bandon

If you have a spare couple of grand, two mirrors from Castle Freke have turned up in Bandon. They were sold during the auction of the castle's contents in 1919. I wonder if the current owner of the castle would be interested in buying them back.

The first preview copies of my book are arriving tomorrow. I cant wait to see it. Im so nervous and excited at the same time.
Posted by David Hicks at 03:32 No comments: