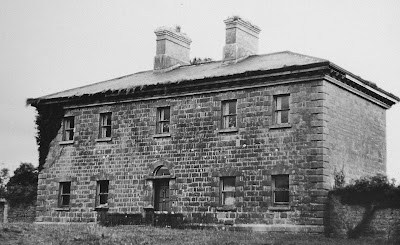 I have always toyed with the idea of purchasing an old country house with the dream of restoring it, however accumulating the necessary funds have always alluded me. So when Ballybrooney House near Killala in Co. Mayo appeared in the Irish Independent last year with an asking price of €40,000, of course I had notions of finally realising that dream. Unfortunately Ballybrooney House, that I visited in 2015, was a shadow of its former self having suffered at the hands of a developer and their abandoned botched restoration which was reflected in the low asking price. 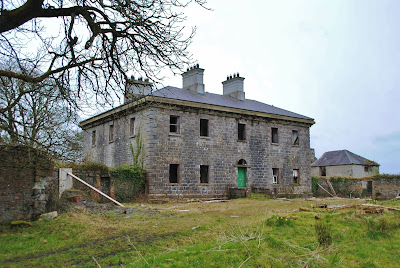 Ballybrooney was an 18th century house that was occupied by a person by the name of Fallon in the late 1770’s. It is described as a detached five-bay, two storey over basement house faced with cut limestone which had a servant’s tunnel, which still survives. A lease had previously been granted on lands at Ballybrooney in August 1753 by Sir Arthur Gore to man by the name of John Perkins Senior. By the 1830’s, Ballybrooney House was recorded as being the residence of J.Perkins, Esq. who was a magistrate. It was also said that John Perkins was the land agent for property owned by the Gores, Earls of Arran another reason possibly as why Perkins leased the lands. At the time of 's Valuation when the property was valued at £17, it was said that Perkins “lives in a comfortable house, pleasantly situated, with the land around it neatly planted. He lets a considerable part of the townland to tenants at will, at 28s per acre per annum. Soil, light gravelly clay. Usual produce, barley, oats, flax and potatoes. Houses are of stone, and the inhabitants in middling circumstances. There are about 15 acres of plantation and 190 acres of bog in this townland.” It was also noted at this time that Perkins also held some land in the parish of Ballysakeery, barony of Tirawley, Co. Mayo. In April 1829, in the church at Ballysakerry, Archdeacon Veschoyle conducted the marriage ceremony of Alexander Hamilton of Donegal who married Susanna, eldest daughter of John Perkins of Ballybrooney. In November 1832, John Perkins, Junior of Ballybrooney was appointed magistrate by the Lord Chancellor. In a letter from October 1845, it was said that the late Mr. Perkins (John Perkins Junior) of Ballybrooney held the tolls and customs of the town of under lease from the Bishop. He built a superior shambles, sunk a pump and enclosed a large and commodious market place, with a wall twelve feet high. However it was said that a Mr. Kirkwood prevented Mr. Perkins from collecting any toll and also had the market moved off the street. By 1845 the tolls of Killala had become the responsibility of Robert Kirkwood of Greenpark Lodge. One gentleman who had his pigs on the public street was told by Mr. Kirkwood that he would remove him and his pigs to the local police barracks. As the man refused the request, both he and the pigs were detained in the police barracks. The trader who wrote the letter said there were no tolls boards displayed in the town by Mr. Kirkwood and that he had done little to improve the town unlike his predecessor. 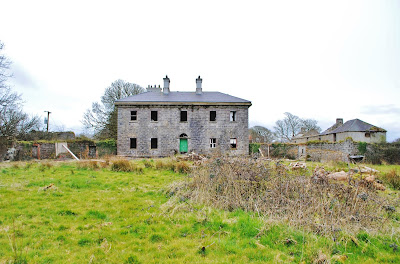 The Perkins family intermarried with the Fetherstonhaughs and the family. John Perkins Senior died in 1795 and his son John Perkins Junior, who was born on March 1st in 1772, married Lydia Fetherstonhaugh. John Perkins Junior died in March 1836 followed his wife who died in 1851. During their marriage they had a number of children Arthur, William, John, , Harriet, Elizabeth, Susannah, Matilda and Sidney. John and ’s son, Arthur Saunders Perkins married Frances Radcliff and the marriage produced a daughter named Frances Sarah Eleanor Perkins. In 1907, it was noted in the press that the death occurred of Frances Perkins at The Villa, Moynalty and it was also recorded that she was the widow of Arthur Saunders Perkins of Ballybrooney. Arthur Saunders Perkins had died a number of years earlier on the 28th May 1868, his last will and testament was proved by the executor Thomas Radcliff of Wilmount Kells, Co. Meath in 1869. However it appears that parts of the will were left un-administered and in 1882, the will was proved again by Godfrey Fetherston of Wyatt Villa near Ballybrack, . This second administration was necessary as elements of the will were left previously ‘un-administered by Thomas Radcliff’. Thomas Radcliff was the only son of the Rev. Stephen Radcliff, rector of Kilmoon, who was married to Sydney, daughter of John Perkins of Ballybrooney, Co. Mayo. In 1876, Mrs. Perkins of Kells (probably Arthur Saunders Perkins wife Frances), , owned 844 acres in but two years later in 1878, George Dundas of Moynalty now owned the land. This would appear to be correct as in November 1877, tenders were invited for the reroofing of the house and out-offices at Ballybrooney. The completed tenders were to be forwarded to either George H. Dundas, the Villa, Moynalty, Co. Meath or John V. Knox of Castlerea Killala, Co. Mayo. In February 1893, an advertisement was placed in The Western People giving notice of the auction to dispose of the contents and effects of John A. Knox at his residence Ballybrooney House. The sale extended to horses, cattle and household furniture and it was stated in the advertisement that Mr. Knox was leaving the area. Eleanor Perkins, Arthur Saunders Perkins daughter, had married Doctor George Dundas and she was recorded as the occupier of Ballybrooney House and 258 acres of untenanted land in 1906 however by 1911 the house was vacant.


Ballybrooney House has always had an association with the Melvin family who came to own it in later years. In 1901, Matthew J. Melvin, aged 44 and a farmer, is living in the locality of Ballybrooney with his brother John, aged 42, who is a rate collector. In 1904 the birth of a son to Matthew J. Melvin and his wife Bridget, at Ballybrooney was announced in the press. Unfortunately four years later, in November 1908, Bridget Melvin, nee Mulherin died. She was the wife of Matthew J. Melvin and the daughter of Patrick Mulherin and Mary Sweeny. In the 1911 census, Matthew J Melvin is still living in Ballybrooney and is aged 54 with his daughter Sarah aged 8, son Hugh aged 6 and two servants Bridget Loftus and Anthony Melody. However I do not think that the Melvin Family were living in Ballybrooney House at this stage and that they moved in after March 1912 when the estate was vested in the Congested Districts' Board. The house, the Melvin Family are living in 1911 is described as having a thatched roof and only three windows in the front elevation. 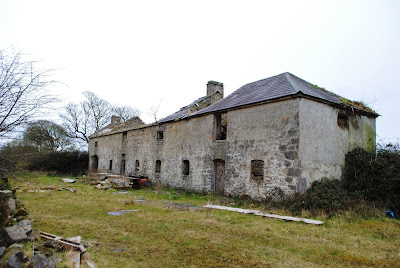 Matthew J. Melvin who came to own Ballybrooney House appears to have been a notably individual who was closely associated with the movement to secure better rights for tenant farmers and was a contemporary of Michael Davitt. As a result of being a member of the land movement, Melvin was convicted in 1883, of being a member of a group of criminal conspirators and spent 5 years in jail. He was released in 1888 and a number of years later, he became a member of Ballina Board of Guardians, Chairman of Ballina District Council, an ex-offico Justice of the Peace and a member of Mayo County Council. During his time on the council he was appointed to accompany Rev. Dr. Conmy and Very Rev Cannon Munnelly among others to to secure funding for the construction of a railway line from Ballina to Belmullet. Matthew was also sent to to report on the agricultural industry in these countries paying particular attention to flax. In 1936 the death of Matthew J. Melvin occurred at Ballybrooney House. It was said at this time that ‘Both his parents were personalities of practical charity to their neighbours, especially to the poor’. Matthew was buried in League cemetery and at the time of his death, newspaper reports said that 'In times gone by he had suffered torture in a British jail to ameliorate the lot of tenant farmers’. In November 1955, the property was registered in the ownership of Sarah Melvin a daughter of Matthew J. Melvin and in September 1979, Ballybrooney came in to the procession of Alice Melvin. 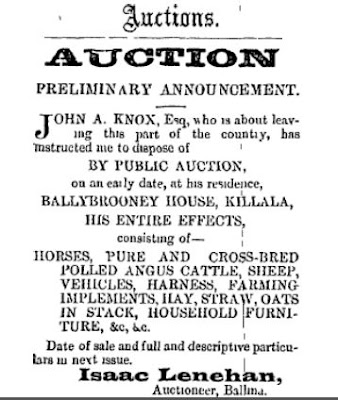 The house was lived in until around 2006 when it appeared for sale with 70 acres of land for €1.3million. It should be noted that the house at this time was awash with original features including fireplaces with servant call bells, solid hardwood doors and an impressive staircase. The accommodation of the house spread over three floors, consisted of a tack room, two kitchens, two servants’ rooms and a scullery in the basement. The ground floor or entry level had two reception rooms together with a formal dining room and two smaller occasional rooms. The first floor had four large bedroom suites, one of which was said to be impressively and extensively panelled. In October 2008, Ballybrooney was purchased by a developer or builder who decided to carry out a restoration of the house. No planning permission was sought despite the fact that this house was a protected structure. The botched restoration involved removing most of the original material, the staircase was taken to pieces, fireplaces, doors and anything of value was either sold or stolen at this time. The original slates on the house and outbuildings also were removed. By the time that the property was reprocessed by banks for loans taken out against it, Ballybrooney House was nothing more than a shell. Further indignation was to be suffered when the remaining lands of Ballybrooney House were sold separately. As these lands had been sold previously, the sale of the house now only included 1.9 acres. This did not include its walled garden or the area immediately in front of the house, so in essence the future owner did not own the front . In the end Ballybrooney was not to be mine, I had intended to immediately stabilise and complete the roof protecting the few original details that survived. In the following years I had hoped to embark on a restoration of the interior however it was not to be, spirited bidding meant that other people also had the same dreams and the house was sold to another individual. Hopefully now Ballybrooney will endure and be restored, while its interior may be decimated, hopefully enough details remain to complete a sensitive restoration. 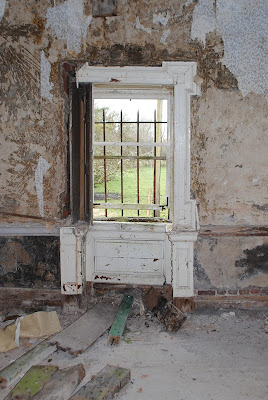