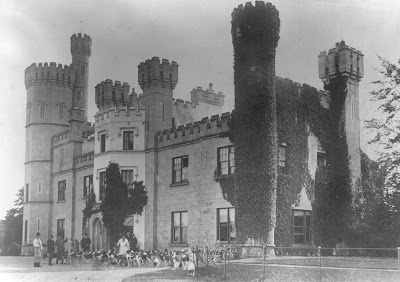 Moyode Castle was built in 1820 by Burton de Burgh Persse to replace Persse Lodge, an earlier house that existed on the site in Galway. Burton acted as his own architect drawing on the castles and mansion houses of his contemporaries in the locality. It was described as an imposing castle of three stories surrounded by a collection of battlemented towers and turrets. The demesne alone that surrounded the castle extended to 600 acres which sat at the centre of a 3,000 acre estate. The 16th century tower that existed in the grounds of the new castle was restored as a folly or eye catcher in the landscape. In 1840, a distillery was bought by Burton Persse at Nuns Island in Galway it was said at the time that Burtons already owned two other distilleries. Today in the Kings Head Pub in Galway there are antique mirrors that advertise ‘Persse’s Nuns Island Whiskey’. Burton de Burgh Persse died in 1859 and the castle and estate was inherited by his son, Burton Robert Parsons Persse who was born in 1828. When he died in 1885, the estate was inherited by his son Burton Walter Persse.  In 1877, a visitor to the castle recorded that the it was ‘ magnificently furnished and decorated, reminding one of the ancestral halls of some Italian prince, with heavy marble mantles, the splendid carved mahogany and rosewood furniture, the exceedingly large windows with deep gilt mouldings before you; and behind, the huge covered tables, all odorous with spice and wine’. In 1891 a newspaper notice appeared in The Irish Times advertising the sale of the contents of the castle by auction under the direction of Burton Walter Persse on the 18th November 1891. Mr. Burton W. Persse died in 1935, he was unmarried and was buried in the family burial ground at Moyode. There are portraits of both Burton de Burgh Persse and his son Burton Roberts Parson Persse in the collection of the National Portrait Gallery in London. In 1904, the Stewards House at Moyode Castle was raided for guns by a group of men known as Moonlighters. It was said at this time that Moyode was owed by Lord Ardilaun of the Guinness Dynasty but had been unoccupied for thirty years except for their caretaker. 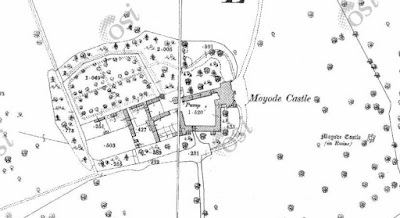 A report in The Irish Independent on Friday 5th May 1916 recorded that on the previous Thursday, soldiers who had arrived in the district marched to Athenry, but found that the rebel army had left, and were now encamped 1,200 strong at Moyode Castle. The rebel army had previously marched to Moyode Castle to gain admittance, here they found the caretaker John Shackleton, his wife and daughter Maisie. They took the castle easily and sent out armed scouts to keep watch and give warning of approaching danger. The volunteers were said to be polite and civil and always referred to Liam Mellows as Captain. They even apologised when one of their weapons discharged accidentally in the drawing room. On their way to the castle, telegraph wires were cut, railway lines torn up and foodstuffs were requisitioned from local farmers. Moyode Castle was chosen to be occupied as the rebels could defend a position such as this easily due to their lack of arms. Cumann na mBan were also present in Moyode Castle catering for the volunteers, preparing bandages and acting as dispatch carriers.

The following day it was reported in The Western People that the Irish Volunteers in Moyode Castle had disbanded and that Captain Mellows who was in command had escaped.  Troops and RIC men had arrived at Loughrea with artillery and were advancing on the castle. The command evacuated the castle and marched towards a country house named Lime Park, however only a small group from Moyode made it there. Mellows believed that from Lime Park they could link up with Volunteers from Limerick, but it was here they were  met by Father Fahy who told them that Rising had collapsed in Dublin. Lime Park like Moode were unoccupied and were entered without force. Rumours of the power of the advancing forces of the Crown caused the group of volunteers to melt away despite the efforts of Captain Mellows. Some of the volunteers abandoned their posts and made for the hills finding it impossible to penetrate the wide band of soldiers and police moving towards them, however they were captured over the following days. The Volunteer’s last move was to Tulira Castle where Father Fahy renewed his pressure on Mellows to disband.

In The Freemans Journal  on the 17th September, 1920 it was reported that Moyode Castle was burned to the ground. In December 1920, a claim was lodged by its then owner Mr. James Walker with Loughrea R.D.C for £40,000 for the burning of the castle .  In July 1921, he was awarded just £4,850.00. The site of the castle was used as a quarry in the years after the fire and as a result very little trace of Moyode Castle exists today. In April 1956, over 200 veterans of the 700 strong force who occupied Moyode Castle gathered there to commemorate the 40th anniversary of the event. The veterans all wore service medals, gathered in front of the ruined castle into which they had marched as young volunteers under William Mellows.