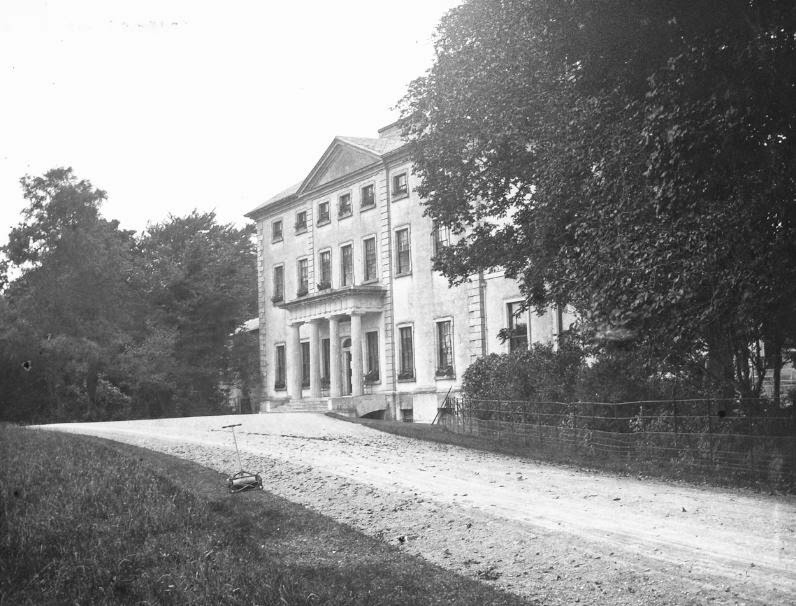 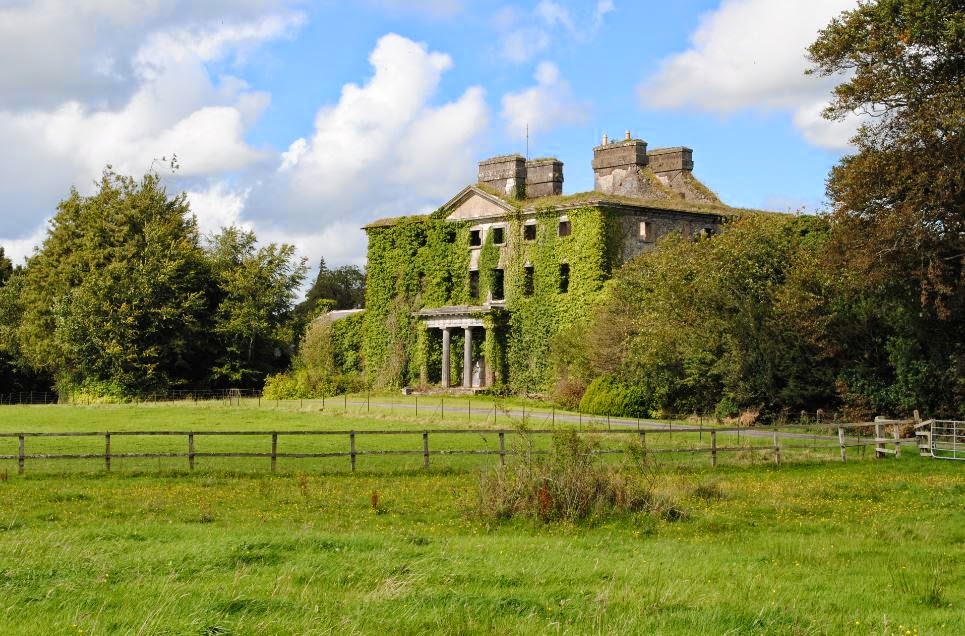 One of my favorite houses featured in my first book is Clonbrock in Galway. While the house exists today in ruins, every so often a piece of furniture comes up for sale that evokes the grandeur of this house.  The location of these items today is surprising, sometimes London and in this instance New York. In March 2014, a set of ten George III, Painted Dining Chairs came on the market having been supplied by Gillows of Lancaster in June, 1801 to Luke, 2nd Baron Clonbrock for his home, Clonbrock. These chairs together with the remaining contents of the house were sold in 1976. Clonbrock stood empty for a number of years until it burnt down in the 1980's. 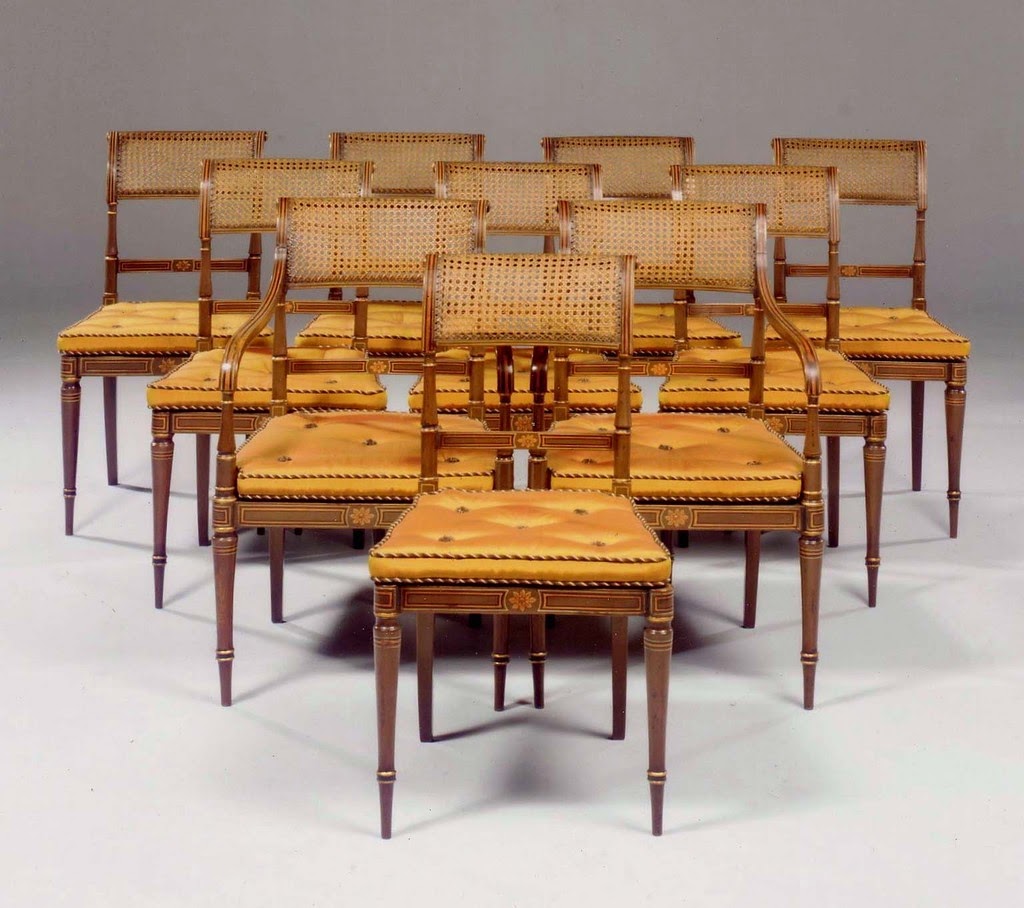 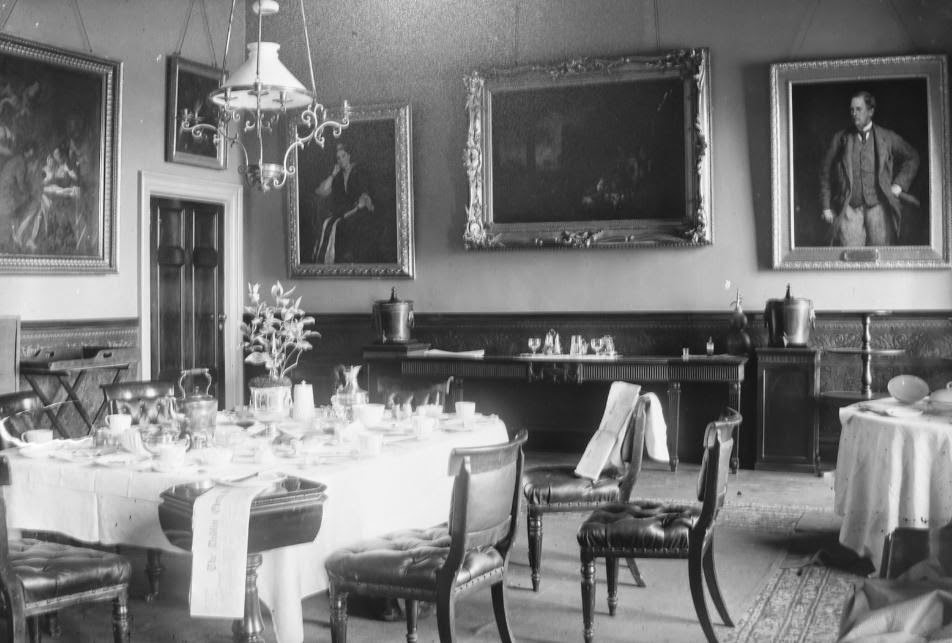 The dining room of Clonbrock, in the top right of this photograph is a painting that carried the following inscription- “The Hon. L.G. Dillon, presented to his son R.E. Dillon by a large number of the Clonbrock tenantry on his attaining his majority, May 21st 1890”. The furniture was sent  from Gillows in twenty six large packing cases and included everything needed for a country house such as library bookcases to tables and chairs.


Accreditation- The National Library of 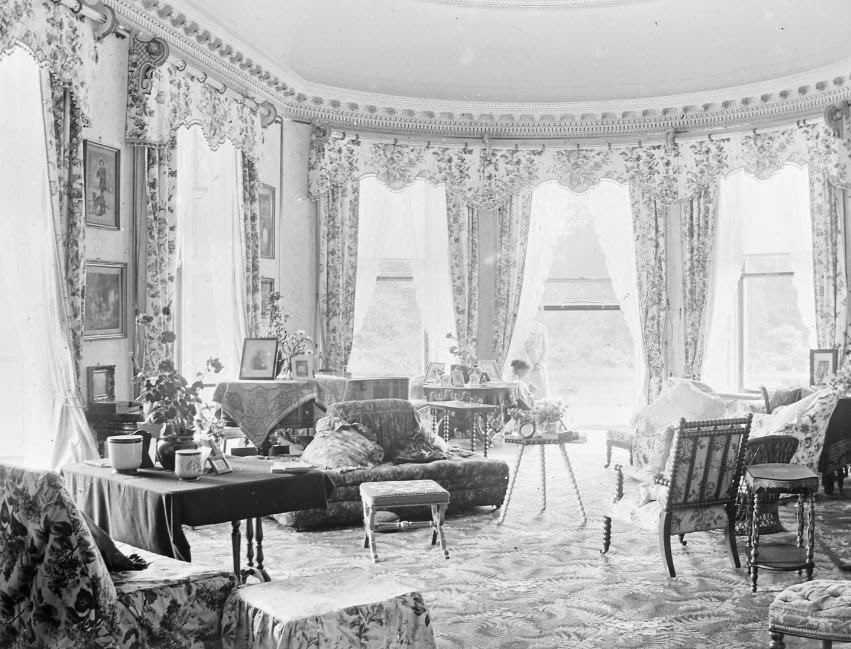 The bow ended extension to the drawing room that was constructed in 1855 as a place for the unmarried ladies of the house to pass the time until a suitable husband arrived over the horizon.
Accreditation- The National Library of 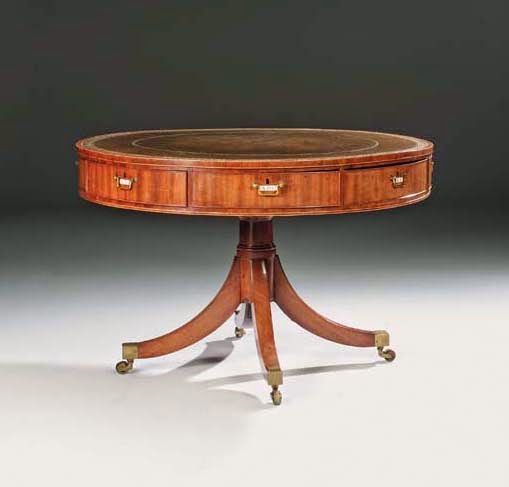 A GEORGE III MAHOGANY LIBRARY DRUM TABLE
By Gillows
The circular revolving green leather-lined top above eight drawers each with a lettered tablet and on square tapering downswept legs with brass caps and castors, lacking keyhole eyelets, the handles original. This table sold for £56,400 in Christies in London in July 1976

In 1976, the decision was taken to sell the contents of the house by Luke Dillon Mahon. Agents from Christies and Linseys were dispatched to evaluate every last item in the house and an extensive catalogue was produced which described the 1500 lots in great detail. The fateful day eventually came when two blue and white striped tents were erected on the lawn in front of the house and the drive and adjoining fields were alive with the hum of cars and lorries. Over 500 people attended the auction and packed the auctioneers tent, just to view the proceedings of the end of an era or to bid on some memento of the big house. All the lots were displayed throughout the house, the dining room table heaved with china and porcelain and the lengthily sideboard displayed large dinner plates and chargers. Some of the locals seen the sale as necessary and others a tragedy. Most people at the time seen no future for a house of this nature unless some foolish person was looking for a home with a lot of cold rooms and acres of leaky roof. The beginning of the auction was marked by a storm which was a metaphor for perilous state that a house like this had been reduced to in the 1970s. Luke Dillon Mahon said his abiding memories of Clonbrock would be the family members that lived there and the view from the drawing room window. The final decision to sell was determined by the harsh economic realities of the time together with the problem of the interior being too large for one person to manage and the exterior that would exhaust the abilities of numerous men. Luke Dillon in a 1976 interview described the house, as a problem and daily life living in it, as a struggle.

Read more about Clonbrock in my first book, which can be purchased by clicking or pasting the links below