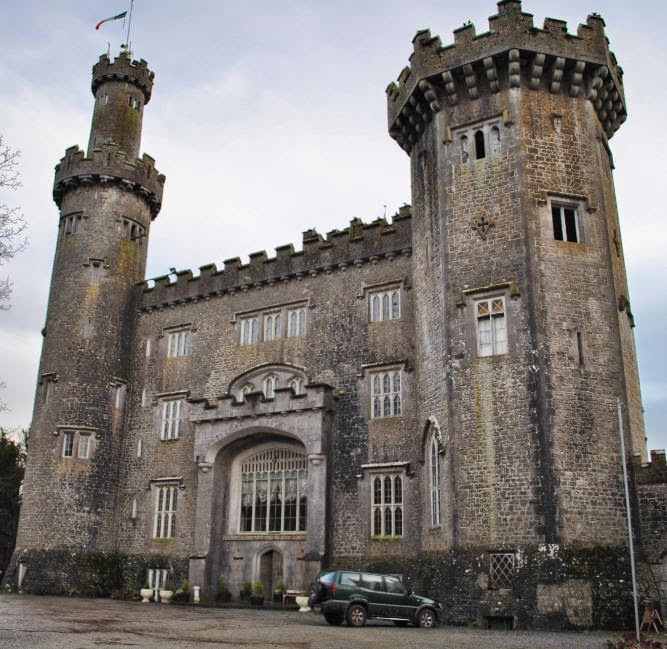 Charleville Forest Castle, located near Tullamore in County Offaly, Ireland, is a building that was designed to provide a dramatic backdrop to the trials and tribulations of the lives of the Earls of Charleville. Its majestic exterior, with soaring towers and turrets, conceals an amazing array of theatrical spaces. Here for a number of years on the walls of its dining room hung an immense painting with an amazing story. 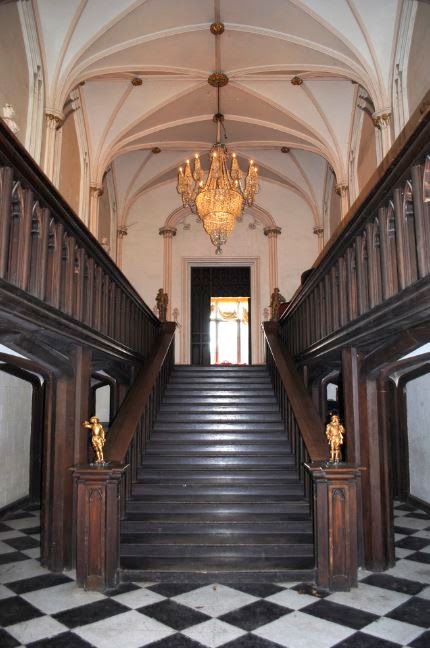 Upon entering the castle’s entrance hall a staircase rises majestically before you. This leads directly to the impressive gallery which is one of the largest rooms in the castle and contains one of the most beautiful plaster ceilings in .
Copyright by David Hicks

Charleville Forest Castle began as the vision of one man named Charles William Bury, who became a Baron in 1797, a Viscount in 1800 and the Earl of Charleville in 1806. As the result of inheritance, he was a man of independent means which allowed him to keep a house in London, mix in polite society and travel the continent. When the time came for him to build a home on ancestral lands in Offaly, he had various ideas and he wanted to create a truly grand vision of a new ancestral seat for his family. Charles William Bury dabbled in architecture and wanted a stately pile to project a grandiose image for himself. He had toyed with the idea of constructing a new house for a number of years and had amassed a collection of unexecuted plans by various architects. By the 1790s Charles’ taste had turned to the Gothic Revival and he began to make crude sketches of a fantastical castle. Around the year 1800, it was the architect-de-jour, Francis Johnston who took Charles’s ideas and fleshed them out. Johnston took his clients crude sketches and combined them with his own architectural genius to produce the building that we see today. 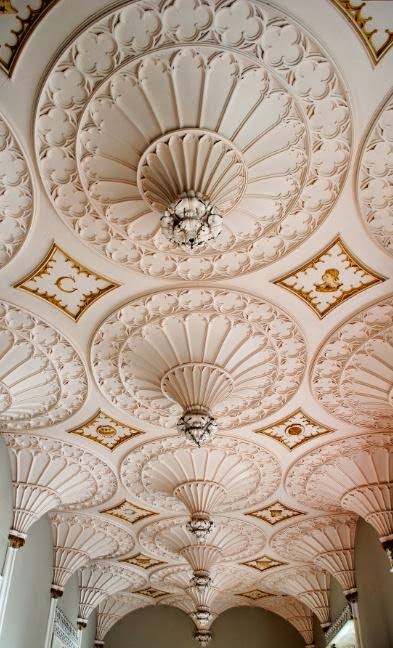 While the castle was being built, expensive tours were made of the continent with items being purchased to fill the cavernous rooms of the castle back in Offaly. As a result of his spending, the coffers of the family fortune were being depleted at an alarming rate and Charleville Forest was not fully completed until 1812. When Charles William Bury, the first Earl of Charleville, died in 1835 his estate was described as being ‘embarrassed’ from a financial perspective. The second Earl of Charleville died in 1851, and his son Charles William George Bury became the third Earl and returned to the castle to live with his family. Eight years later in 1859, the third Earl died and his son, Charles William Francis Bury, who was only aged only seven became the fourth Earl of Charleville. The title of the Earl of Charleville never seemed to rest too long with any of its recipients and in 1874 was again relinquished to another. The fifth and final Earl of Charleville was an uncle of the fourth Earl, brother of the third Earl and son of the second Earl. Alfred Bury inherited his title in 1874 but died one year later in 1875 aged 46, without issue. In the space of just under seventy years the title of the Earl of Charleville had passed through five members of the Bury Family and was now extinguished. Charleville Forest Castle was inherited by Lady Emily Alfreda Julia Bury, a daughter of the third Earl and it was she who made a number of further improvements to the castle. She had married in 1881 Captain Kenneth Howard, who died four years later. He had assumed the additional surname of Bury to ensure that it would be passed on to their son. Charles Kenneth Howard Bury inherited the castle in 1931, after the death of his mother but chose to reside at the more manageable Belvedere House in a neighbouring county. The contents of the castle were sold in 1948 and when its interiors were photographed in 1962 for Country Life, the empty rooms were filled with furniture from Belvedere House. Charles Kenneth Howard Bury died in April 1964 and estate then passed to a cousin.

By this time, the castle was empty and its rooms were devoid of their contents however one large survivor remained. An immense painting hung on the end wall of the dining room where it remained forlorn after the clearance of the castle’s contents. It was the paintings vast size at nearly 10 ft high by 20 ft wide was the reason for its abandonment after it remained unsold in the 1948 auction. Some unwanted visitors to the castle in the following years left their mark in a very permanent way by vandalising and slashing the canvas’ lower extremities.  There it remained for twenty-two years until a gentleman by the name of Graham Gordon opened a door of the empty dining room in this abandoned Irish castle.  As he entered the darkened space, a beam of sunlight spread across the corner of a large painting on the opposite wall. As he traversed the room, his heartbeat quickened as he now stood in front of the large expanse of blackened canvas. He began to wipe away years of dust from the bottom of the gilded frame and there inscribed before his eyes were the words ‘ No. 52 King Henry VIII, Act 5, Scene 4, W.Peters’.  Here in this forgotten castle, Graham had discovered a long lost masterpiece that dated from 1789 painted by the artist Matthew William Peters. This painting depicted the christening of Princess Elizabeth I, from the Shakespearian play Henry VIII. It was originally commissioned by John Boydell in 1786 when he engaged the greatest artists of the day to produce paintings that illustrated the works of Shakespeare. These paintings were then displayed in a gallery that he had built in London in 1789. The Boydell Gallery eventually contained 170 works, however the locations of only forty-five of these are known today. The Charleville painting was featured in a catalogue from 1790 from the Boydell Gallery where it was named as No. 52 in the series, hence the relevance of the number 52 that appeared on the inscription on the frame. 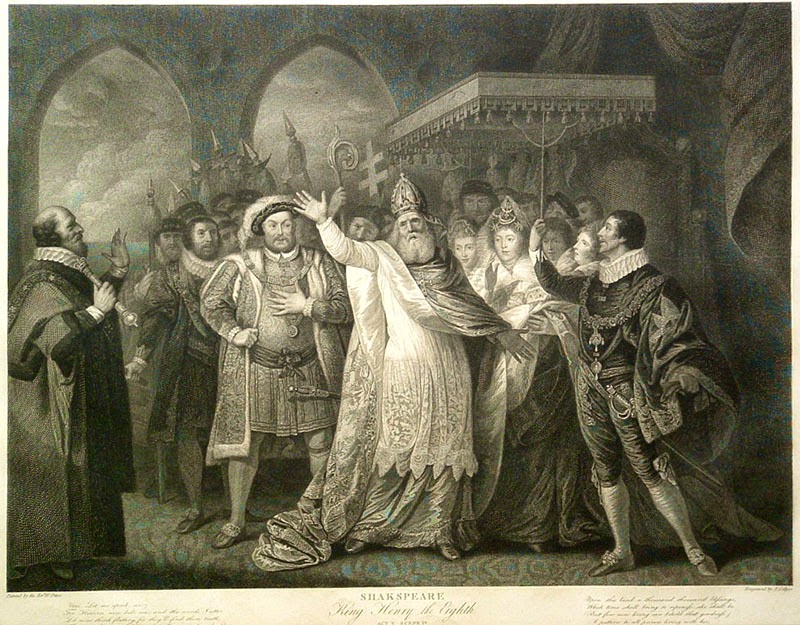 Painting No. 52 as it appeared in the Boydell Catalogue

The Boydell Gallery experienced financial difficulties and eventually the paintings were consigned for sale to Christies. They were displayed together publicly for the last time in May 1805 and then the collection was dispersed. The No. 52 painting was sold by James Christie for twenty-three pounds, two shillings to a London art dealer who was enlisted to help furnish the newly built Charleville Forest Castle. The painting was shipped to Offaly and is depicted in a drawing of the room from 1812. Here William Peter’s masterpiece remained for 165 years until its eventual discovery by Graham Gordan. 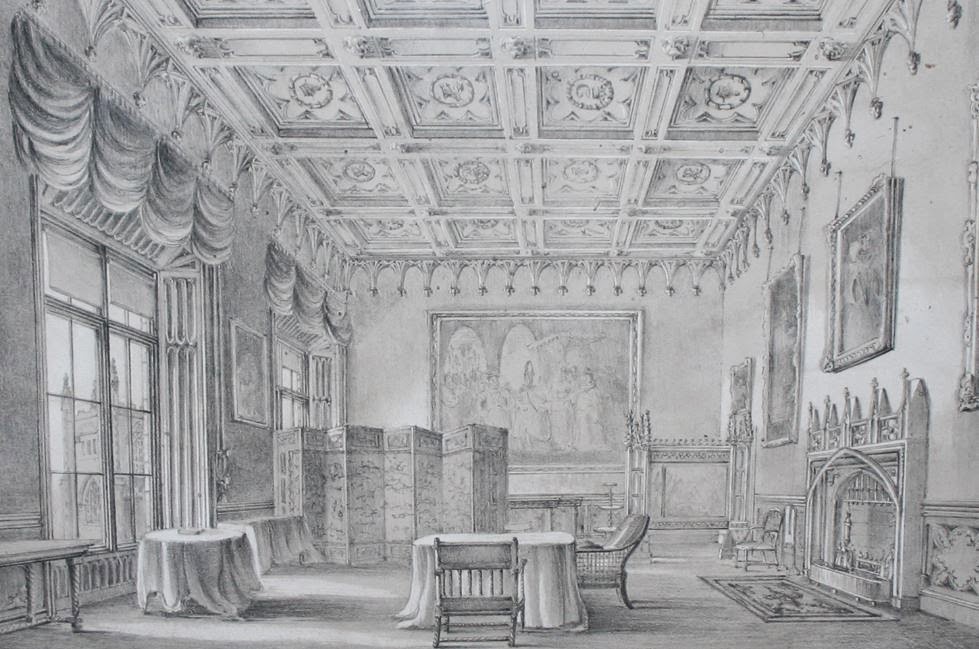 An image of the dining room from 1812 shows a large painting on the end wall that was purchased by the first Earl in 1805.
Collection 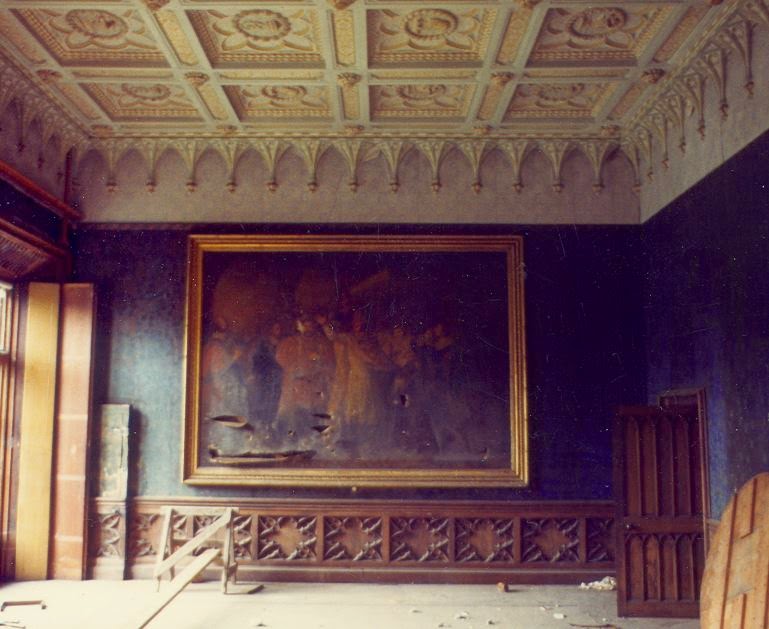 The painting that Graham Gordon discovered in the dining room of  in 1970. The castle at this time had been abandoned for over two decades since an auction in 1948 had cleared the castle of its contents leaving only this painting.
Copyright  Graham Gordon

The large rolled up painting leaves in 1970 for the first time since it arrived 165 years previously. It was one of the last items that had a direct association with the first Earl of Charleville who built .
Copyright  Graham Gordon


Major Hutton he owner of the castle, agreed to sell the painting to Graham as at that time the future of both it and the castle were uncertain. The removal of the painting from the castle was something that had never been attempted since its arrival 165 years before. Luckily, the frame behind the painting had been designed for disassembly with large bolts holding the corners together. After the frame and stretchers had been removed, the rolled up painting was carried out of the door of the castle and placed on to the trailer of a waiting tractor. The last item that had a tangible connection with the first Earl of Charleville was now leaving the castle to be packed and shipped to Canada.  Upon arrival in Canada, the canvas was in a bad condition, years of dirt, grime and a thick layer of varnish gave the painting an extremely dark appearance. The size of the painting meant that the servants in Charleville Castle never ventured beyond cleaning the bottom of the frame. Over two years its slash marks were repaired and the sections of the painting which had been lost were renewed. Once restored the true beauty of William Peter’s work could be appreciated. Today the painting resides far away from Charleville and is currently on loan to the Beaverbrook Art Gallery in Canada. 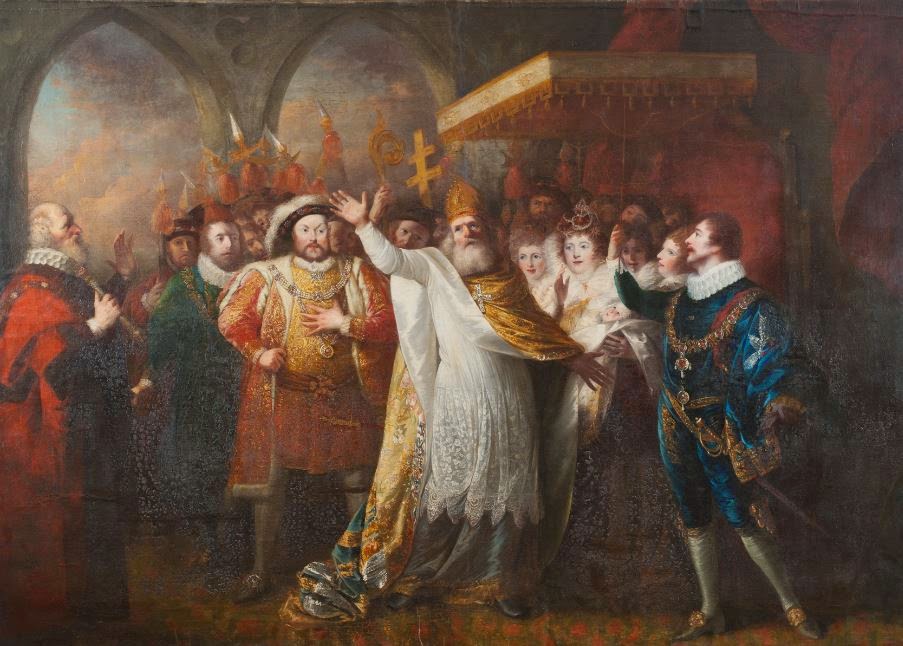 Today Charleville Castle is run by the Charleville Castle Heritage Trust which was created in 1994 as a voluntary non-for-profit organisation. The castle is managed and maintained by Dudley Stewart who is aided by a team of volunteers who come from all over the world and help conserve and restore the castle. The castle in recent years has tried to earn its keep in many ways, such as the Castlepalooza Music Festival that takes place in its grounds each year. Other revenue streams include the castle being used as a setting for television productions which focus on its ghostly inhabitants. It has featured on Living TV’s Most Haunted and Fox TV’s Scariest Places on Earth both of these productions have tried to give the castles reluctant ghosts their five minutes of fame. This aging dowager of a castle is now also a film starlet, having recently had starring rolls in BBC’s adaptation of Northanger Abbey and also in the 2007 Hollywood film Becoming Jane.