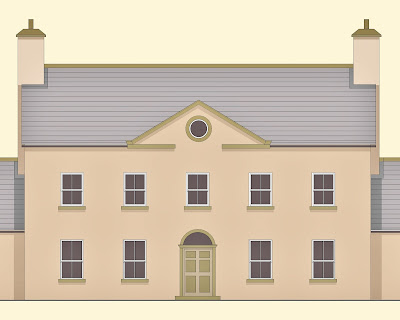 The only trace of Farmhill House to be found in the landscape near Kilfian, Co. Mayo are the high walls of its large walled garden. When mentioned, even today, the name of Farmhill and that of its most infamous occupant Harriette Gardiner, still conjure stories of her cruelty that reverberate locally. Farmhill was home to the Gardiner family, the last male member to live there was Major John Gardiner.  He was born in October 1797, the son of John Gardiner and Anne Gildea and was known to be the grandson of Charles Gardiner of Tonroe and Maria Bourke of Heathfield near Ballycastle. In May 1819, John married Elizabeth, the daughter of James Cuff, Lord Tyrawley who is associated with Deel Castle and Castle Gore near Crossmolina. This union produced a daughter in 1821, named Harriette, who became notorious after inheriting the estate from her father.

By 1876, the Farmhill estate extended to over 4,000 acres which was not entailed and as a result Harriet inherited everything when her father died in in 1850’s. The house at Farmhill was a two storey residence with a large entrance hall, drawing room, dining room, seven bedrooms and other ancillary areas for servants including the kitchen. Relatives recorded that Harriette was known as ‘Hassie’, and most people who knew her thought her to be mentally unstable and an alcoholic. Whether this is true or not, it is said that Harriet had a masculine appearance, she supposedly dressed as a man and had her hair cut in a mannish fashion. Her course language was matched by her bad manners and she seemed to relish an opportunity to cause trouble for the tenants of her estate. Her family decided that maybe a companion would help placate Harriette and she would mend her ways. A lady, Miss Susan Pringle, who was known to be extremely religious arrived at Farmhill. However, the plan backfired, instead of Susan having a calming influence on Harriette, the debauched Miss Gardiner corrupted Miss Pringle. Soon the new arrival to Farmhill was a seasoned drinker and the duo became notorious in the local towns for causing trouble.

In the 1880’s the local and national press often carried stories of evictions, tenants being imprisoned and families being dispatched to the workhouse under the instruction of Miss Gardiner. Harriette was ruthless as she pursued her goal of clearing as much of her land of as many tenants as possible which she seen as a nuisance. Local shop keepers were so disgusted by Harriette, that they banned her from entering their premises. She retorted by threatening to shoot them with the gun she carried at all times. Her need to be armed stemmed from an incident in 1869, when an attempt was made on her life. On Christmas night in 1869, she was shot through a window while sitting at her own kitchen table and received seven or eight grains of shot to her head. It was reported that she would have been killed if there weren’t two of her servants present at the time of the shooting. This was supposedly an act of retribution as she had evicted a large number of tenants over the preceding six months. As a result of this attack the RIC erected a temporary police barracks opposite the gate to Farmhill. After this  it is said that Miss Gardiner spent little time at Farmhill, making it hard for any would be attacker to know where she was in order to stage another attempt on her life. The pettiness of Miss Gardiner was illustrated by a case that appeared before the courts in 1881. Harriet had three of her tenants before the Ballina Petty Sessions Court for the removal of mud from a nearby bog. The tenants were using the mud as manure for their farms, which had been allowed in Harriet’s father’s time however Harriet stated that if they wanted the mud, they would have to pay for it. Miss Gardiner announced to all present in the court that ‘ I do not care what my father did. He chastised you with rods, but I will chastise you with scorpions’. One wonders about the origin of this statement as there couldn’t have been too many scorpions found in Kilfian in the 1800’s. In one week in 1885, she evicted 12 families from their homes aided by the sheriff and his bailiffs. The report of this event concludes that ‘the only prospect that now lies before them is the detested workhouse’. Harriet and her accomplice Susan Pringle now had a reputation that preceded them and both became known as ‘The Witches on the Warpath’.

Harriet Gardiner died aged 71 on the 24th July 1892 at her cottage in Tully, Belcarra near Castlebar where Miss Gardiner also had extensive land holdings. Her remains were removed from Belcara at 7 o’clock in the morning to Castlebar Train Station and from there transported to Ballina for interment in Rathreagh. It appears from newspaper notices that Miss Pringle was in residence at Farmhill at this time. The Connaught Telegraph reported that ‘a weird and grotesque figure, and a baneful one, has passed away from this mortal stage’. The reports continued that’ She will long be remembered in County Mayo not alone for her semi-masculine attire and her repulsively eccentric ways, but for the Pharaoh–like and utterly unfeminine hardness of heart which she exhibited for years towards a most miserable and poverty stricken tenantry……She occupies an unique niche, even in the temple of that dark pantheon which is filled with the ghosts of  landlordism’.

Harriet Gardiner left all she owned to Miss Pringlle who intended to continue Harriet’s campaign of evictions however the Land Acts that were introduced  ‘clipped’ her wings. Afterwards Miss Pringle began a period of self-improvement, she drank less, no longer smoked her pipe in public and also began to look more presentable in the local town. She became a member of Killala District Council and a chairman of the Board of Guardians. Susan Pringle died on the 20th July 1910 and her will was proved by Robert William Christie of 21 Elgin Road, Dublin and Charles Ball Fitzgerald of Provincial Bank House, Nenagh in Tipperary. The entire contents of Farmhill were offered for sale in November of 1910. Farmhill contained a lot of valuable furniture, some of which originated in Deel Castle in Crossmolina as Harriette’s mother was a member of the Cuffe family. The hall contained half a dozen mahogany chairs with the Cuffe family crest and another two chairs with Lord Tyrawley’s crest together with a set of chairs with the Gardiner crest. The house contained a collection of oil paintings made up of family portraits and landscapes. Full particulars of these paintings were given in catalogues by the eminent London expert, Mr. J.L. Rutledge of The Reynolds Gallery, Great Newport St., London which gives us an indication of the importance and value of the art on sale. Two Sheraton inlaid sideboards, 12 feet long had been removed to the coach house for the sale .Over 500 books were also offered for sale which included volumes on history, travel and a large number of novels. The auctioneer for the sale was Henry G. Black from Westport as possibly no local auctioneer would handle the sale due to the reputation of the Farmhill and the women who lived there. Some items of furniture which were purchased went to some of the large country houses in the area such as Palmerstown House near Killala. Afterwards Farmhill became the parochial house for the local parish priest who lived there until 1953, after which it was demolished, the land of the estate was previously divided among the local tenants. Today nothing is left of Farmhill, but the infamous name of Harriet Gardiner appears to live on well over one hundred and twenty years after her death.