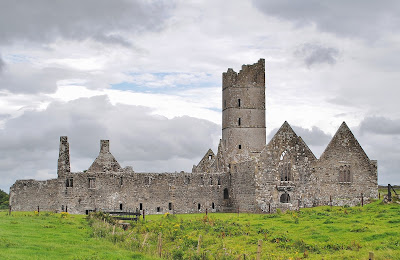 One might wonder what connection an ancient monastery in county Mayo has with the world of the Irish Country House but Moyne Abbey located near Killala is where the Knox family made one of their first homes in the county in the early 1700’s. In the next one hundred years they would come to dominate the county through the vast tracts of land that they would accumulate and the large country houses that would be built by later generations of the family. However it beggars belief that an ancient clock, said to be centuries old, had existed at Moyne Abbey and survived in the Knox’s possession up until the 1920’s.

The Franciscan Friary of Moyne was founded by Mac William de Burgo in 1455 and the building was consecrated in 1462. The monastery was burnt in 1590 by Sir Richard Bingham, the English Governor of Connaught. The friars left after suffering persecution at the hands Bingham and the lands of the abbey came in the possession of Edmund Barrett. However it soon came into the hands of an English widow who allowed the friars to return to the Abbey in 1606 where they remained until 1618. After which the monastery was owned by the Lindsay family who demolished part of the monastery with gun powder. It is also said that they sold the bell from the tower of Moyne for £700, which was a gift to the friars from the Queen of Spain. It was purchased for the Protestant Cathedral of Armagh and as a result of this sale and their treatment of Moyne, the Lindsay family were cursed and despised by many.

Later in 1718, the abbey came in to posession of the Knox family when Francis Knox, the son of William Knox of Castle Rea, took up residence at Moyne after his marriage to Dorothea Annesley. Initially it is said that parts of the abbey were still habitable and that Francis re-modelled a wing of the monastery and lived there. It was recorded by that Knox Family that ‘ in 1750 the then proprietor was building a dwelling house on the site of the old walls and that some of the buildings on the north side were taken down for that purpose’. After the Knox family left Moyne to live in Rappa Castle near Crossmolina, the property at Moyne was bought by the Kirkwoods, who are remembered for their association with Bartra Island and the nearby town of Killala. The Knox family may have left Moyne but it appears that they took a number of items with them to Rappa from the monastery that included an ancient clock.

A visitor to Rappa Castle in 1882 noted that ‘the entrance hall - a comfortably furnished apartment - across a second, into the crowning glories of a third, where we were requested to wait till Captain Knox made his appearance’. He showed the visitors the many treasures that the castle contained including the clock from Moyne Abbey. This ancient artefact was found sitting on the flagged floored kitchen of the castle where they were told by Captain Annesley Arthur Knox that the clock had ticked as it had done for 300 years. The visitor went on to describe that ‘The case of some dark wood beautifully carved. I thought it was bog oak, Captain Knox said mahogany, which would make the case to be much younger than the clock. The Captain assured us that it was the best time-keeper in the world. It only requires winding once a month, it used to show the day of the month, but some meddler disarranged that part of the machinery. The dial plate is of some white metal, brilliant and silvery. Captain Knox said it was brass, but I have seen things look more brazen that not so old.’  The clock was recorded as being in good working order in 1903.

Captain Annesley Knox died in 1897, his nephew inherited the castle at Rappa and its contents but a number of family deaths in close succession resulted in the sale of the contents of Rappa in December 1924. The vast scope of items on offer ranged from a 1924 Chevrolet de Lux motor car to an ancient cannon on a stand. Interestingly also listed in the contents for sale, is the Holy Water font from Moyne Abbey but there was no mention of the ancient clock. However it was later recorded by a member of the Knox family that the ancient clock that came from Moyne Abbey was sold as a box of scrap metal and had left the castle before anyone realised its true value. As a result of this oversight one of the most fascinating artifacts associated with this monastery situated on the banks of the Moy disappeared from sight and has never made a reappearance. 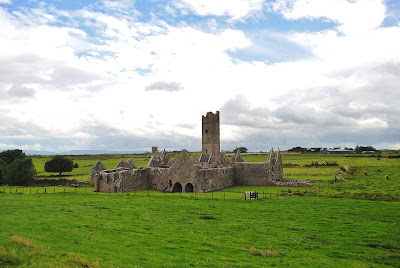