Sheskin Lodge
Where the worlds of whiskey, wealth & literature
meet in the wilds of Co.Mayo 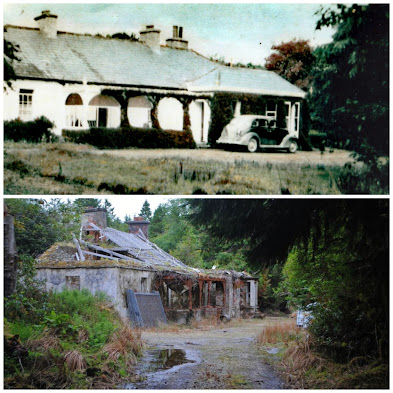 Many times I have heard the word ‘lost’ being bandied about when referring to some large country house being misplaced as if it was a child’s toy. However Sheskin Lodge in Co. Mayo, the subject of this piece, does truely fulfill this description. Located in the wilds of county Mayo on the west coast of Ireland, lost in a wood and easily passed by, this former hunting lodge is not accessible by car and is a forty minute walk from the nearest public road. This building does not appear on any list of protected structures or indeed it does not feature in the architectural heritage of Mayo. It is overlooked and forgotten, the modern world has passed it by, very few people may know that this house has a connection with one of Ireland’s most famous whiskey distilling families and is also associated with the world of literature. 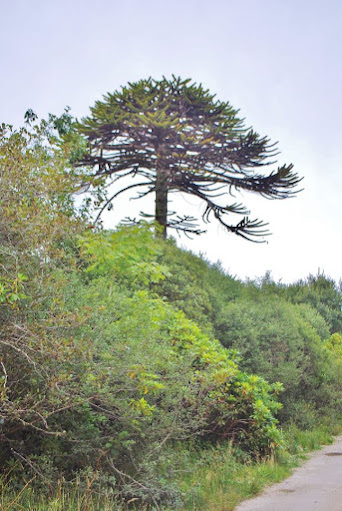 A Monkey Puzzle Tree which indicates the location of Sheskin Lodge
that was once surrounded by beautiful grounds..
Picture Copyright ( above) ICHC 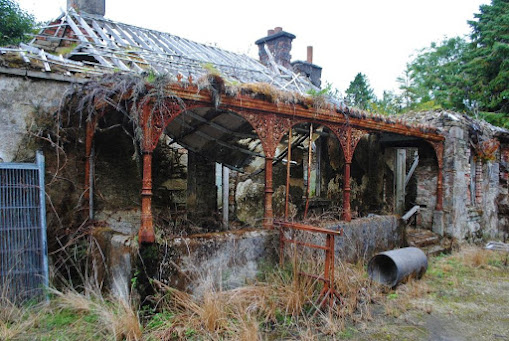 Sheskin Lodge is difficult to locate but one of the few features that indicate its presence at the heart of a wood is a monkey puzzle tree which looks out of place in this wild Mayo landscape. I came to know of this hunting lodge though a family connection as members of the Wills family once acted as the stewards of the Sheskin Lodge for the Jameson family. The first mention of Sheskin Lodge that I could find is in November 1858 where it states that road repairs will take place ‘between the mail car road and the lodge in Sheskin’. In November 1866, it is noted that a Charles Monck Wilson is listed as being the owner of Sheskin Lodge however in July of 1868, the estate was listed for sale in The Landed Estate Courts. The estate is described as running to 7,012 acres which included a ‘comfortable shooting lodge, gardens and offices’ all situated in the centre of the estate. This sizable estate stretched from Ballyscastle to Bellacorick in Co. Mayo. It is at this time that Sheskin Lodge and the surrounding 7,000 acres were purchased by John Jameson. In August 1878 it was recorded that, John Jameson, now listed as the owner of Sheskin Lodge, has donated £5 to the repair of local churches. It is said that when the Jameson family purchased the lodge they made many improvements, which probably included the addition of the distinctive glazed veranda to the front of the lodge with its decorative cast iron supports that have survived to this day. John was the descendant of John Jameson from Scotland who founded the famous Whiskey Distillery that still bears the family name. John Jameson who owned Sheskin was extremely wealthy and when he died in Dublin in December 1881, he left an estate valued at over £ 300,000. He died at the family home St. Marnock's in Dublin which is now the Portmarnock Hotels and Golf Club. He was succeed by his son also named John, born in 1835 who inherited his holdings including Sheskin Lodge. King Edward VII, known as the party King, visited the Jameson family home at St Marnock's, where the golf-keen family also developed an early nine-hole course, founding one of the city's oldest golf clubs. Bertie, as the King was known, was in particular friendly with the youngest brother, Willie Jameson, a good sailing friend of his since 1880. It was Willie who personally helped Edward to commission his racing yacht the Britannia. Members of the Jameson family owned impressive homes in Dublin, including One of the most grandiose is Sutton Castle commissioned by Andrew Jameson, a grandson of John Jameson who founded the famous distillery near Smithfield. He made the decision to decamp from his townhouse on Fitzwilliam Square for the fresh air of the southern slopes of the Howth Peninsula, and commissioned architect Alfred Darbyshire to design Sutton House, a 40-room Tudor-style mansion finally completed in 1895. The last Jameson to own the house was Harriet Kirkwood, Andrew's daughter, a well-known artist. While the Jameson family was wealthy and mixed in the highest echelons of society but they were no strangers to scandal. James S. Jameson, one of the Dublin whiskey heirs and a well known explorer, had died of fever on an expedition in the Congo in 1888. But by 1890 revelations were coming out that prior to his death, he had purchased a 10-year-old slave girl and handed her over to cannibals so he could observe and make sketches of her being killed and eaten. That expedition became the inspiration for Joseph Conrad's novel "Heart of Darkness". The revelations brought considerable hostility towards the privileged family. 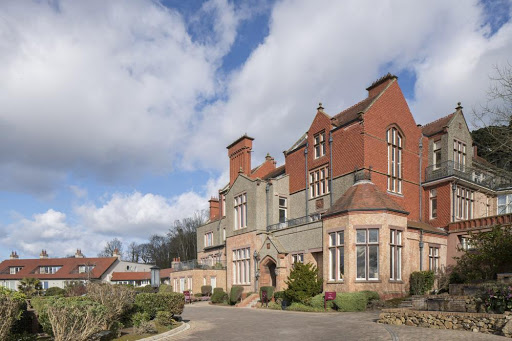 Sutton Castle
It is recorded in the census of 1901 that John Wills aged 33 (my own great grand uncle) was the Steward of Sheskin Lodge and lived there with his wife Mary Jane aged 26 their two year old daughter Gladys. They were members of the Church of Ireland and all were born in Mayo. Also resident in the lodge is there servant Maria Clarke aged 25. By 1911, Sheskin has another steward and it is William Wills (John Wills' brother) aged 34 who lives there with his sister Sarah aged 44.  The lodge at this time is described as having five outbuildings, seven windows in its front elevation and consists of ten rooms internally. A later auction advertisement describes the building as having four bedrooms, a drawing room, dining room and kitchen. It appears that the Jameson family’s connection with the lodge ended in May 1922 possibly due to the death of John at the age of 85 in 1920, the family no longer had a use for the lodge. At this time it is advertised that an auction of the household effects of Sheskin Lodge will take place under the instruction of William George Jameson, the brother of John. The furniture was removed from the lodge to Boland’s Salesrooms in King Street, Ballina, Co. Mayo. Afterward it appears Sheskin became the home of a number of individuals during the course of the 1930’s. In 1931, it is stated that Sheskin Lodge is the residence of Col. J.F. Champion who was complaining in the local newspaper about the state of the Crossmolina to Belmullet road. In March 1938, it was advertised in local newspapers that C.G.T. Morrison of Christ Church, Oxford intended to dispose of the contents of Sheskin Lodge. 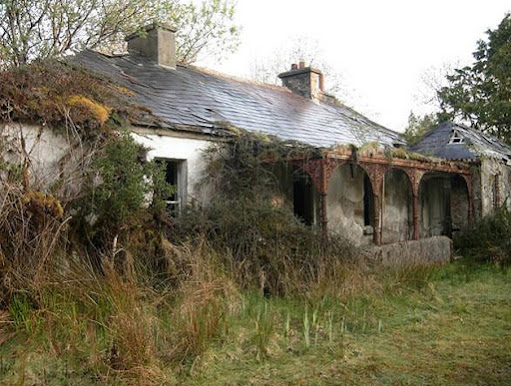 Sheskin Lodge prior to the removal of its roof.
Image Copyright NIAH

In June of 1939 Sheskin became a brief home to the British writer Terence Hanbury White who travelling to County Mayo to look for a suitable isolated location to rent, in particular a grouse or fishing lodge. He became known for his books which were based on the court of King Arthur and his knights of the round table. One of his best known works is ‘The Sword in the Stone’ which was adapted into an animated film by Walt Disney. He took Sheskin Lodge for September of 1939 and intended to have a large house party but the Second World War was looming and his guest list began to shrink. The lodge at this time was described as crumbling aristocratic bungalow with a glassed in winter garden set amid feral rhododendron and pine. While White was visiting Belmullet on September 1st  1939, he first heard that Germany was at war with Poland. Just over a week later, during a trip to Crossmolina by the Garrett Family, who had made the journey to Mayo to stay at Sheskin with White, confirmed the news that England and Germany were now at war. White remained at Sheskin until October 1939, during this time living alone in the woods in a lodge lit by candle light. While the lodge has been abandoned for a number of years, its decline appears to have been accelerated with the recent removal of its roof. It is probably this building's location which is its downfall, the isolation that have attracted so many people over the years to escape from the bustlingly world has resulted in its very existence being forgotten. 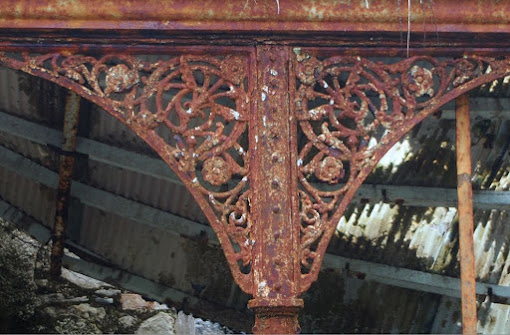 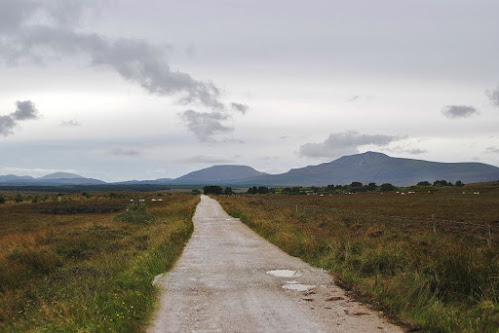