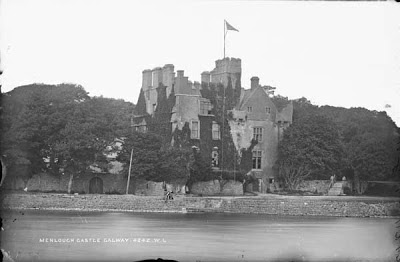 Picture from the National Library of Ireland
(Above) The ancient ancestral home of the Blake Family located on the banks of the River Corrib in Galway and below the ruin of the castle today after the fire in 1910. 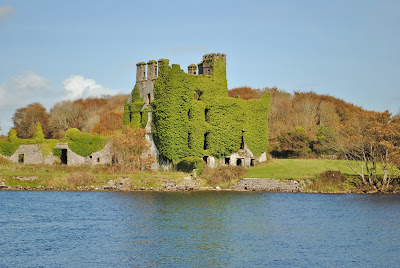 Menlo Castle built in 1569 and was the ancestral home of the Blake family until July 1910 when disaster struck and the castle was destroyed by fire. An ancient building of Norman style it is situated on the left bank of the Corrib River about a mile from the town of Galway. A pier wall extended for about one hundred yards along the river front and on this was once mounted a small cannon and a telescope. These instruments it is said were located here for the detection of approaching intruders in times past. In 1910, Menlough Castle was the home of Sir Valentine Blake the 14th Baronet, his wife and their daughter Miss Eleanor Blake. In July of that year, Sir Valentine was in Dublin for a number of days undergoing an operation. At the time castle was said to be one of the oldest in Ireland and contained numerous paintings, tapestries and various other heirlooms of the ancient family. All the rooms of the castle were sumptuously furnished, wainscoted with black oak and the impressive central staircase was made from the same material. On the fateful night in 1910, a fire broke out on the suite of rooms occupied by Miss Blake who could not escape because of her disability. On that night the only other persons on the premises were the coachman James Kirwan and two servants Miss Browne and Miss Earley. 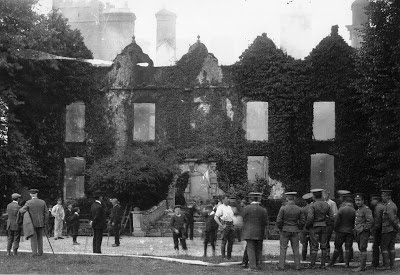 James Kirwan was awakened at 5.40 am by the screams of the two female servants. He was sleeping in a bedroom located over the hall door and on trying to escape he was met with flames and blinding smoke. He soon realised that escape by the staircase was impossible as it was now in flames. He made his escape by the window and lowered himself to the ground fifty feet below using the thick ivy that grew on the façade of the building. On reaching the ground with some difficulty he could now see that the whole castle was ablaze. On the side of the castle facing the river large plumes of smoke were pouring from all the windows. Kirwan ran around to the opposite side of the castle to where the two servant girls were trapped on the roof screaming for someone to save them. When the fire broke out, the maids escaped on to the roof of the castle through a skylight when they found their escape by the stairs cut off by fire and smoke. Kirwan rushed to the gate lodge to get help and eventually procured a ladder which was found to be twelve to fifteen feet short. Bundles of hay were placed on the ground and the girls were persuaded to jump. Miss Earley jumped and landed awkwardly and was killed, Miss Browne fared better but was still in a terrible state and was conveyed to the County Hospital. Despite the best efforts of various fire appliances there was no hope of saving Miss Blake or the castle which was a complete inferno. Eventually the roof and floors gave way and crashed down into the basement of the castle below. As Miss Blake’s remains were never recovered a Memorial Service was held in St, Nicholas’s Church in the city which was attended by a large congregation. The Blake Family was represented by Mr Thomas Blake, the brother of Miss Blake; her parents were unable to attend as they were still detained in Dublin. As the memorial service took place the remains of the castle were still smouldering and debris lay seven to eight feet high, despite the intense heat the search continued for Miss Blake’s body. This search was in vain and today a memorial still exists in the grounds of the ruined castle remembering her loss. 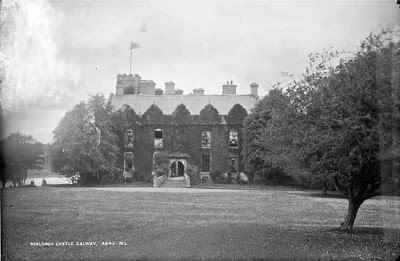 Picture from the National Library of Ireland 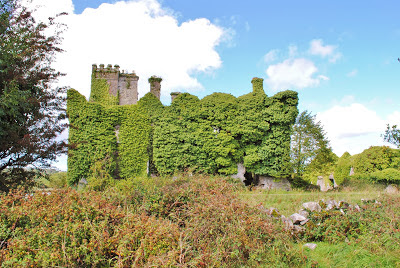 The surviving maid who jumped from the roof of the castle the night of the fire and survived was Miss Mary Anne Browne. She sued her employers under the Employers Liability Act as she had suffered severe injuries in her legs after her forty foot jump. She still suffered from partial paralysis and the doctor could not confirm if this would be permanent. Sir Valentine Blake who had great sympathy for her situation but as the fire was an accident; he declared that he was not responsible. The judge presiding over the trial agreed and her case was dismissed together with a subsequent appeal. A relative of the unfortunate maid who was killed when she jumped from the roof of the castle tried to sue Sir Valentine for her loss. The case was also dismissed as she could not be classed as a dependent of the deceased. Two years after the fire, Sir Valentine Blake died at Longford Terrace, Monkstown, Co. Dublin. He was 76 and had succeeded to his title in 1875. He had been the Justice of the Peace for County Galway and in 1872 acted as High Sheriff for the county. He was succeeded by his son Mr Thomas Patrick Ulick John Harvey Blake. When Sir Valentine was buried there was a large police presence which ensured the event passed peacefully. This was a result as when his father died in 1875, Sir Valentine buried his Catholic father as a Protestant. This did not sit well with the mainly Catholic tenantry around Menlo. As a result of this a riot broke out at the funeral and a number of people received prison sentences. In recent years a local businessman proposed to restore the castle and grounds retaining the upper floors of the building for his own personal use. He had proposed to invest over € 12 million in the project which was supported by many however the economic downturn ensured that the project was mothballed. The owners of the castle were served with compulsory purchase orders in the year 2000 however no money has exchanged hands thirteen years later. 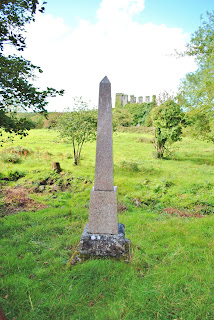 The monument erected in the grounds of Menlough Castle to remember Miss Blake who was lost in the fire in 1910. The remains of the home in which she lost her life can be seen in the background.