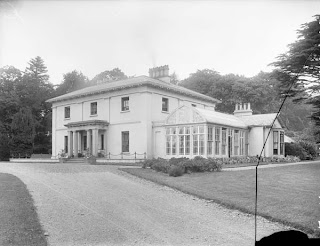 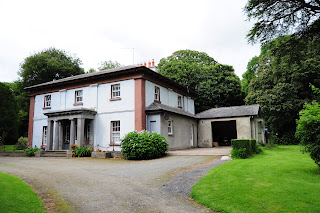 Moynalty House is located in a beautiful village that’s gave the house its name and yet again it is one of those houses that if last night's lotto number came up, I would be heading off to Meath with my cheque book. The Farrell family are responsible for the creation of this house that still retains its integrity despite the years taking their toll on some of its features. Since the black and white picture was taken the house appears aletred, its substantial glass house is gone and the adjoining room has become a garage.


The story of this house begins in the 1820’s which coincided with the transformation of the entire village. Moynalty together with several other town lands were purchased in 1790 by James Farrell for £34,500. James was a Catholic brewer and moneylender from , who began to purchase land after the relaxation of Penal Legislation in 1782. James lived in in but carried out many improvements around Moynalty. James’s son John donated land in 1819 for the construction of a Catholic Church at the opposite end of the village to the existing Protestant church which was also being rebuilt at the time. After John married in 1829 he was given the Moynalty estate by his father. Around 1825, John turned his attention to building a home for himself and his wife and the resulting house was constructed in the Regency style, a three-bay, two-storey house with a shallow hipped roof and over sailing bracketed frieze. An imposing feature of this house is its Limestone Doric columns surmount the steps that lead to the front door, these give the house a stately presence despite its small size. Despite its proximity to the village and roads, the house is hidden from view by high walls and trees and the only indication of its presence to the outside world is its decorative irongate posts and beautiful gate lodge. The surrounding estate at its height extended to 4,790 acres.


John did not restrict himself to just creating a home for himself and his wife but he also turned his attention to remodelling the whole village. The redevelopment of the village began in 1826 and was completed by 1837; this involved the removal of mud huts and other sub standard buildings. All the houses on the river side of Main Street were removed, creating a green area that sloped down to the river. Much was made over the years of the village of being “all to one side”, however in the 20thcentury buildings were constructed on the river side. The tradition of improving the village is something that has continued down through the years, with the village winning the “Tidy Towns” awards numerous times including being named as overall winner yet again in 2011.


John’s son Arthur who was born at the time of the construction of the house inherited the house and in 1860 he married Lucretia Pauline, the daughter of the 13th Viscount Gormanston. In the census of 1901, John Arthur Farrell was aged 75 and his wife Lucretia who was aged 62 and her profession is listed as a “daughter of a Peer of the Realm”. Living with them at this time were their three sons and a daughter. To see to their needs was a substantial staff listed as being part of the household which included a cook, house keeper, house maid, laundry maid, kitchen maid, coachman and footmen. When Arthur passed away in 1904 his son John Edward returned from Tasmania to run the estate but he sold it due to ill health. In the 1911 John Edward aged 49 is now listed as being the head of household, his wife is Harriet Susannah who was born in in . There two sons and four daughters and their governess are also in residence together with eight servants which includes a new position in the ranks of the staff from 1901, a ladies maid. Only one of John Edward’s six children was born in Moynalty, the other five were born in Hobart, Tasmania, the eldest child is 22.


In November 1928 under the instructions of Major V.J. Farrell to sell Moynalty House on Monday 19th November. The house is described as having 2 drawing rooms, dining room, library, hall, office, 4 bedrooms, bathroom and lavatory on the entry level, top floor consists of 6 bedrooms, lavatory, the basement contained kitchen, servants hall, pantries and dairy. The conservatory was still in situ at this time and is described as having its own heating, the remainder if the house was heated by central heating. The inner yard contained 6 loose boxes, hay shed, workshop, engine room, garage, oil shed and men’s quarters with lavatory. The farmyard consisted cattle shed, oats loft, laundry, stabling for 8 horses, boiler houses and turnip house. There were also two tennis courts, large garden, green houses, and gardeners store rooms, potting shed, gate lodge and sheds.
Posted by David Hicks at 03:03